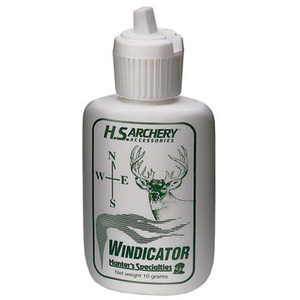 You head to the tree stand.  The wind is blowing ever so slightly.  Is this a good spot?  Will the monster whitetail catch my scent?  This is where the windicator comes in.  It is kind of like baby powder in a squeeze bottle.  Only it is not.  Well, it is not baby powder.  The fine powder mist is unscented so as not to scare off any targeted game quicker than what your own scent would do, but allows you to see the true direction of the wind so you can prepare your hunt properly.

Posted by Bill Howard at 7:00 AM No comments:

Whether it is for hunting or fishing, a log book is a great way of keeping notes on the adventure.  Even in familiar territory such as a hunting club, if you document the 'extras' you will be surprised at how much you can learn about animal movement based on weather, moon phases and the time of year.  It also allows you to note how the other species you encounter react to the elements.  For instance, if you are bass fishing and run across a crappie honey hole, you can get the information down for a later trip.

Rite In The Rain makes a very nice spiral bound journal that can be used even in wet environments.  A waterproof pen that has compressed ink so that it can even write upside down finishes off the all outdoors inclusive notebook.  They have journals specific for everything including Outdoors, Bird watching, Bowhunting, Fishing, Fly Fishing, Upland bird hunting, Waterfowl hunting, and Big Game hunting.

Get the journal, make the notes, become a better outdoorsman.

Ready for the no-brainer?  A rubber reusable twist tie that is available in a number of different lengths.  Do I need to go over what this can do?  Well, here is a start.  They can be used for strapping ANYTHING to ANYWHERE you need it.  Easy to bend when you want it to makes it simple to use.  Twist it a couple of times, and it holds true. 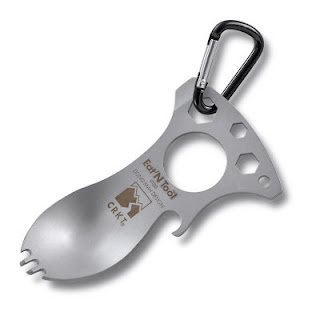 Looking back at a few items on the list, you can see my fondness for items that can do more than one task.  I also feel most outdoorsmen already carry some type of multi-tool, so I do not have the 'classic' multi-tool that fold out revealing pliers, knives, emergency beacons, kitchen sinks, and butler in my list.  But I do have a GREAT multi-tool that I am sure you have overlooked.  The Eat'N Tool by Columbia River Knife and Tool (CRKT) is a dandy!  First glimpse reveals a spork (that in itself is a multi-tool with the spoon/fork combination).  But cast into the handle is a 6mm, 8mm, and 10mm wrench.  Off to one side is a standard screwdriver.  The other side contains a carbiner (non weight bearing mind you, so DO NOT expect to repel Everest by using this, the Paracord Turkey Tote, and a few of the Little Hotties!) to attach where ever.  Midway down, beside the spoon, is a bottle opener.  By the way, a couple of weeks ago I carried my lunch to work and forgot the silverware.  I went back out to the truck and grabbed my Eat'N Tool.  Worked perfect. 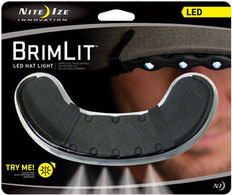 Everyone needs a handy light for the outdoors.  This one fits on the brim of your hat.  Two output modes ranging from 8 lumens to 14 lumens, it is bright enough to get you to your hunting stand in the morning, and get you out at night.  It also works great for  those emergency ‘repair’ jobs at night when in the woods, keeping your hands free and always shining in the direction you are facing.  Another plus: It is made of a foam material that is super light weight, only 1.1 ounces.  The batteries can last up to 16 hours and are readily available at any convenience, drug, or chain store. 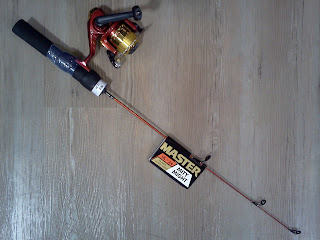 Picture this. You are hiking in the mountains. Beautiful water falls surround you.  Below the cascade is a crystal clear pool of water with some of the largest trout you have ever seen. But you are hiking. Nothing you can do right? Wrong.  The Mighty Mite Rod and Reel is super small; small enough to fit in a backpack even.  And when you get that fish on the line, well, you are in for a thrill!  There are websites devoted to the largest catches with these inexpensive angling miniatures, and you need to see some of the trophies.  It works from the mountains to the lakes to the coast.  It can be used as a survival tool because of its size as well.  So when you plan that backcountry hunt for elk this fall, bring one of these along and maybe you can have fish one evening instead of hauling in extra food. 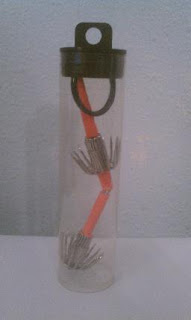 Sometimes you come across something that you just bury your forehead in your hands and go “why didn’t I think of that?”  This is one of those items!  I know anyone that has ever hunted from a tree stand has dropped something from the top and have to decide whether or not to leave it at the base or climb down and get it.  The Silent Retriever eliminates that decision.  A simple tool with enough grappling hooks to attach itself to whatever you lost, it can be lowered from the stand by its attached cord and brought back up to your waiting hands.  It comes packaged in a small container that takes up virtually no room in your pack, weighs next to nothing, and comes in a variety of colors (I like the orange myself so I can see the Retriever and maneuver it to what I dropped).  No more worrying about that phantom gust of wind that took your hat off your head, the Silent Retriever is there to save the day.  Don’t ask me what to do if you forget to tie the cord to the Silent Retriever to your stand and accidently drop it as well though.

Next: Mighty Mite Rod and Reel
Posted by Bill Howard at 7:00 AM 1 comment:


I put each of these smart phone apps down together, because they both do similar things.  And, I use both religiously when hunting or hiking.  The advent of the cell phone turn mini-computer is akin to Ben Franklin discovering electricity in my book.  With GPS features, realtime weather satellite feeds, waypoint markings, camera/photo locations, and topographical and satellite map caching these apps can save you so much money that you can afford to purchase several extra batteries to take along.  Trust me, the batteries weigh a lot less than the GPS system, emergency radio, camera, and trail markers do.

Even better still, is the ability to work the apps from your home computer (or work computer; yes I know you don’t just work at work) and they automatically synch with your devise.  Your wife can even follow your trails at home so you can prove to her that you were hunting in the deep wilderness during the weekend.

Next: Silent Retriever
Posted by Bill Howard at 7:00 AM 1 comment: 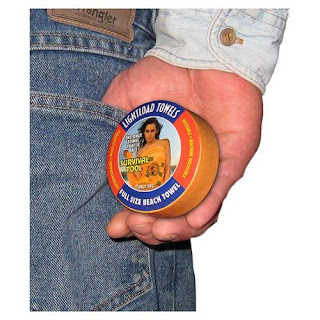 Imagine a towel that is not much larger that the size of a poker chip when dry, but expands as large as a large wash cloth when wet.  LightLoad Towels do just that.  After it dries it can be used again as well.  LightLoad also has a beach towel sized towel that comes in a nifty little and light dry size.  Either can be packed taking up no space or weight, yet offer so many benefits you would be foolish not to include one in your supplies.

Next: Phone Apps
Posted by Bill Howard at 7:00 AM 1 comment:

This next 'Bowhunter's Special' item for less than $20 could not be listed at a better time.  The planning for this 20 + 4 items was done a couple of months ago.  So at the time, I had no idea I would be able to make the announcement at the end of this product explanation...so make sure you read all the way!

If you bowhunt, you HAVE to pick up the bow and sling an arrow in the water at some point!  Bowfishing is one segment of the hunting industry that is growing at a steady pace.  If you have not tried it, here is a great product to get you started for less than $20!  I believe in the 'Keep It Simple Stupid' philosophy, and the drum reel handles it with ease.  You have a drum or bell (that's what I always called it) that the bowfishing line wraps around.  Instead of using a fishing style reel, you hand line it and wrap it around the drum when retrieving the arrow.  Simple. 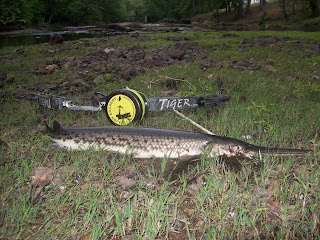 ANNOUNCEMENT!
I am currently writting my first book:  Bowfishing the Slam
This book will take the reader on an adventure across the country in pursuit of some of the greatest and strangest aquatic species North America has to offer!  We will head for alligator gar, Asian carp, common carp, paddlefish and snakehead in fresh water, then go  after mako shark, hammerhead, stingrays and skates in salt water.  Then to top it all off, the only non-fish species, the American alligator will be hunted.

Two companies have signed on so far as partners in the quest: 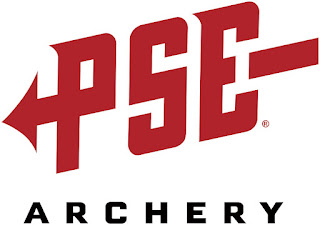 Shorts of the quest will be chronicalled in:


Boonie Hat
Everybody needs a boonie hat.  These things are versatile, and with my personal tastes in hats, I just think they look good!  Used by the military since the Viet Nam war, they are prized for their multiple uses.  A boonie can be used as a pre-filter for water, a bucket, the top of a tee pee style shelter so shed rain, a stove mitten, and yes, of course a hat.  The band around the boonie is convenient to place leaves and other foliage to break the outline and provide additional camouflage, or it can be used to hold things such as shotgun shells and fishing lures.  The wide brim all around the had also provides extra protection from the sun for more than just the top of the head, such as ears and back of the neck that a baseball style cap will not.
BOONIE HAT - $9.99-$19.99
Next: Bowhunters Special Cajun Archery Drum Reel
Posted by Bill Howard at 7:00 AM 3 comments:

Yaktrax is more than a cool name.  It is a spring coiled attachment that fits over your shoe or boot.  The coil provides the extra traction in ice, snow, and even mud to prevent slips and falls (The mud is harder to clean out of the coil, though).  The rubber straps conform to the sole of the shoe or boot.  The coil is at the bottom of the tread.   Not only is it great for the outdoors,  a set is very handy in areas hit hard by snow and ice such as the Northeast when walking back and forth from home or work to your vehicle since it is so easy to put on and remove.
YAKTRAX - $20.00

Next: Boonie Hat
Posted by Bill Howard at 7:00 AM 1 comment: