‘Tis the season when the stores will be packed and the streets will be filled with hopeful shoppers in search of that perfect gift. With the release of the new video game consoles that are guaranteed to lock your kids (and some adults) into near comatose states as they stare at the screens while only taking breaks for school and maybe sleep, here are a few alternative ideas of bonding ideas rather than purchased possessions.


Anyone who has ever been in scouts will likely remember when all the packs come together at some camp located near a lake. One of the highlights of the weekend is always the canoe races. Canoes can be rented for cheap and provide for joyful and interesting times. The venerable Old Town canoe has floated many a youngster over the years. A long paddle on the water is sure to brighten any kid’s outlook, and for good measure give the canoe a rock side-to-side a couple of times.


Another event that is sure to please involves some raw chicken. I know, your face is probably squinting with your nose all crinkled up as you read that sentence. But if you put a little bit on a hook and toss it in the water your kid will be amazed by what comes for it. For even more fun, go at night and set up a bonfire. When the rod tip gets hit with a hard thump and the strange creature with the flat mouth and tentacles stretching from its face is surfaced, there is no doubt that both you and your kid will examine the catfish with a sense of wonderment.


While the fire is burning, we shouldn’t let it go waste. A staple of any good trip that includes a fire includes chocolate, graham crackers and marshmallows. I know somehow when those three ingredients are combined over an open flame  the woods fairy sprinkles some type of pixie dust overtop and it becomes a necessary food group. Heck, even if the fish do not immediately bite the s’mores will be fine in passing the time until they do.


Near many of the lakes, rivers and streams you can find a good field. After the farmers have cultivated the land and turned the soil another magical thing happens. In fact, it has almost become a lost art. At some point and time in a child’s life they all wish to visit the past. Not the past as in yesterday or even last year, but of times long, long ago. Amateur archaeologists is what we used to call ourselves. We would dream of digging and finding the next great monstrous dinosaur. Of course we never found one, but we did find other artifacts of equal intrigue, at least for a kid. There were many days we spent arrowhead hunting. Sometimes we would find finely chiseled rock that left no doubt to its purpose. Other times, we were just wishful and accepted that the small triangular shaped granite with a sharp side may be one. Either way it ended up in our small tote bag or pocket as an addition to the collection.


There are numerous other activities that can be spent, but the key is to spend those moments together. As each seems like a product of time in our hurried lives, they are but a just a moment in our overall life. However, they can be a moment remembered and cherished forever.
Posted by Bill Howard at 7:00 AM 1 comment:

Tim Bowers was like many of us. He enjoyed hunting, particularly bowhunting, and headed out to his farm of soybeans and corn. He climbed a tree that provided an overlook in hopes that Mr. Big would make his way into shooting distance.  Then the unthinkable happened. Tim planted his foot on a dead branch about 16 feet up the tree and he heard it snap. As Tim met the ground below he heard another snap.
The family believes Tim lay there for over five hours before he was found. Three vertebrae were crushed leaving Tim with no movement from his neck down. His sister, a nurse, recognized the severity immediately and knew the prognosis was grim.
Tim was only 32 years old. He just married the love of his life in August after a three year courtship. They were expecting their first child in April.
Tim survived the fall but would be paralyzed for life. Family and doctors provided information to Tim regarding the options of his future. Tim asked for them to remove the ventilator that he would have to rely upon for the remainder of his life if he chose so, so he could speak. He then asked to keep it out. He essentially told the doctors to pull the plug so his family would not have to endure the pain of his new state of life.
Let that sink in a little.
Last year North Carolina had three fatalities from hunting incidents. Two of those fatalities were results of tree stand falls.
An overview shows North Carolina’s numbers decreasing in both actual numbers of fatalities as well as percentage. The previous two years resulted in 12 deaths combined. The number of licensed hunters, 528,636 was the largest number since 1994-95. However the three deaths tied the lowest number since non-firearm fatalities were recorded.
Even with the lower numbers, in most cases these types of fatalities can be prevented.
Most falls occur during the climb up or down a stand. With the colder weather coming in, frost on the steps for the stands creates a slick surface especially for the rubber soled boots hunters tend to wear. Gear being tangled amongst tree limbs and brush is another issue that causes falls.
But it does not have to be a true tree stand either. One of the two fatalities in North Carolina last year from a fall was on the typical tripod stand that is popular in the open fields.
All could have been prevented with a proper safety harness.
While browsing through Facebook posts last weekend I noticed a friend who was on a deer hunt up north. His post read “Harnessed in and ready to play…in Central Ohio.” Throughout his preparation he remembered the one thing that could determine his fate. While his firearm would be necessary to take a deer, his harness was necessary for him to ensure his safety. Smart move Scott.
For Tim, he was told he may gain a very small movement in his neck to turn his head one way or another, and after surgery to his spine he may eventually be able to sit upright. He would not ever be able to hold his baby in his arms or give hugs. Tim will never see his newborn child.
Tim’s family went to the farm and found the tree Tim fell from. The cut it down to a stump and fashioned a cross out of the remainder as a memorial to the son, husband, and would-have-been father Tim was to become.
Posted by Bill Howard at 8:31 AM 1 comment:

The Quest for Tranquility

During the night the cold air set in. The Eureka Apex tent was set up before dusk in under 5 minutes and angled so the cover would deflect the wind away from the door openings on either side. The 10 degree sleeping bag was cozy enough to strip down to the minimal undergarments and remain completely comfortable. The cold air did not bite at my lungs, rather it was more refreshing the way a winterfresh Lifesaver is. 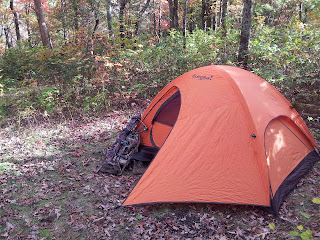 A couple of hours before sunrise a light pitter-patter began to tap on the tent cover. Then it increased in intensity. A full unforgiving rain had set in. I checked my boots that were positioned underneath the cover’s wind break and they remained dry. I thought to myself as I rolled over in the sleeping bag that the one sure way to count on rain is to camp out in a tent.
Morning started late due to the rain but the long day before demanded a little extra sleep anyway. By mid-morning the rain had dissipated and I was ready for the expedition ahead. I double checked the items in my Alps Outdoorz Pursuit backpack to make sure I had what I needed and I remove what I didn’t. As happens most of the time, I did not remove anything. The gorge had deer and bear, both of which were in season, and the river had trout, therefore the bow and the fly rod was coming along. I had a full water bladder and with the low temperatures overnight it was as if it were straight from a fountain. I carried extra batteries, a light, food and a single propane burner. 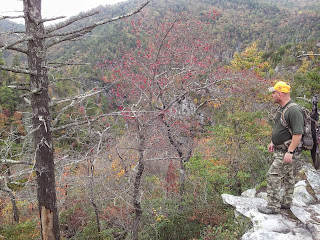 The hike down the mountainside was a couple of miles. I felt the hike down would be no problem even with the 50 pounds strapped to my back. I also knew the hike up would be much harder so I wanted to time the way down and allow for that time and a half for the hike back out. I was already warned not to get caught there once the sun set. “If you are still there when darkness comes, you better be prepared to stay overnight,” were the words of wisdom.
The hike down was beautiful to say the least. When there wasn’t scenic overlooks in which I could view the area, the underbrush and tree canopy provided a tunnel of peace. At times the path consisted of a small ledge with loose rocks where the nearest thing to get a handhold was the top of a tree from the slope below. Not a small tree mind you, but one of aged timber stretching for the heavens. 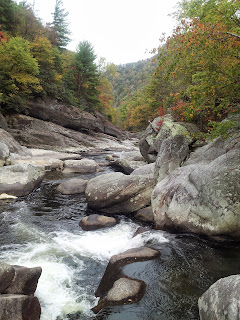 And there, after the hour trek, was a sight of unbridled beauty. The mighty Linville flowed around, over and beneath stonework carved by the hand of God. It played music as it weaved its way that Mozart and Beethoven would only hope to mirror. Upriver lay a large pool with varying depths. I gazed at the glistening surface and adjusted my sight to catch a peak of what was below.
Trout camouflage well with rocky bottom rivers, as well as flounder do on a sandy ocean floor. But I caught the movement and verified that it in fact a trout. I prepared the fly rod. This was my journey’s quest. I presented the fly into the pool and watched as the trout fluttered about beneath. Every once and awhile I would see one dart up on the attack and reap the reward of a well-placed lure. Mostly though, this was a trip to cleanse the soul rather than reel in a fish. It worked. 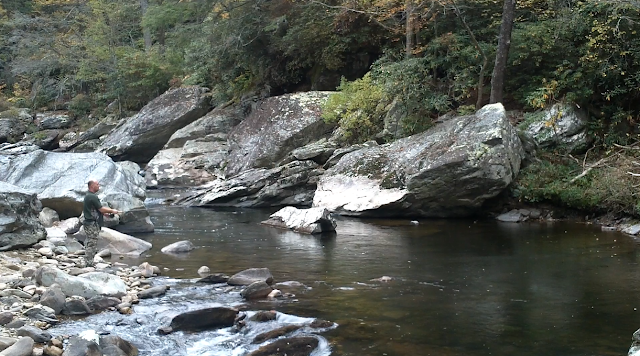