When I played baseball in high school I remember a talk the coach, another player, and myself had prior to our first conference game of the season.  The other player was our leadoff batter. He was fast and in practice could spray the ball to any field easily for a base hit. I was not as fast of a runner, nor did I hit as well as he did.  However, for some reason, he was struggling in our non-conference schedule and I was getting on base regularly whether by walks, hits, or fielding errors.
I could go in to a number of reasons why this occurred. One, the other player admitted he was extremely nervous leading off. My role was to take pitches to give any runners on base a chance to test the catcher’s arm to set into motion our base running plans. Even with the bases empty, I stayed in that frame of mind, and it allowed me to get to base by taking bad pitches.
Our meeting was to inform the two of us we would be switching batting positions. As the leadoff batter, I had to get on base. No matter what our third base coach would signal, I had the green light to steal second base whenever I felt I had an advantage. Again, the goal was to test the catcher’s arm so we would know how aggressive we could be when on the base paths.
Each evening leading up to that first conference game I would fall asleep envisioning that very first at bat.  I would watch the opposing pitcher during warm-ups to determine what pitches to look for. The umpire would signal the last warm-up pitch and the catcher would toss it back to the second baseman as the ball would flow around the horn and back to the pitcher. “Play ball!” the umpire would grunt loudly motioning towards the field.
In real life, those steps played out exactly as planned. The pitcher threw a lot of curve balls during warm-ups and I planted my feet squarely towards the front of the batter’s box. “Let’s see what you’ve got,” I thought to myself. I could see the break in the pitcher’s wrist as he released the first pitch. The seams of the baseball grabbed air as it rotated towards me. I clearly saw the curve ball was on the way and could tell where the break would occur. Instinctively the bat reached out across the plate making contact with the rawhide. The ball hugged the barrel just before launching down the third base line. The angle was right and I watched the ball sailing towards the outfield. As I neared first base I watched the ball clear the outfield fence by about 20 feet.
“Foul ball,” the umpire called out as he waved his arms towards the other team’s dugout down the third base side of the field.
Although the ball was foul, I had played the moment through my head so many times that nothing in the scenario up that point was foreign or surprising. I was confident in the moment. I was ready. For full disclosure, I struck out on the next two pitches as the pitcher had a heck of a fastball that I could not catch up to standing there in the front of the batter’s box.
Now, nearly 30 years later, I lay down at the end of the evening doing much the same thing. There I am, in my tree stand with hours to go before sunrise. I hear crunching below as a couple of does and a fawn chew on the corn in the field. The moonlight catches something way out in the field, however it is still much too dark to see what it is. Or is it? No, I can see now that the light is glistening of a couple of tree limbs.
No, wrong again. Those are antlers. They are moving towards the stand. As he approaches I can only hope he hangs around until day break. The nervousness departs as I become comfortable watching this beautiful specimen establish his alpha dominance over the smaller bucks coming in.
And I fade off into my dreams of the night.
You may think to yourself, “Bill, this mental preparation dreaming didn’t work too well for you 30 years ago as you struck out.”
Yes, but I finished the game with two hits and three stolen bases.

Four Wheelin' and a Contest!

The trail was clear, although the terrain was rough. Hills and rocks and slides were as much a part of the trail as asphalt is to a highway. Throughout the whole length, a short step too far would carry you over the edge which dropped hundreds of feet where the only thing to break the fall was the ground itself.
My wife, daughter and son were taking this treacherous route. Since the trail lead to nowhere, I kept thinking to myself this is why mountain climbers seek the pinnacle of a majestic outcropping of rock and earth made from eons of plates colliding with each other. We just wanted to see what lied ahead, remember what was behind us, and enjoy the present.
While making the trek, I caught a high pitched rumble behind us. The noise gradually grew louder and I motioned for my daughter and wife to stay close to the inside of the trail near the upward mountainside. Bears, bobcats and even a rumored mountain lion, though highly doubtful, are said to roam the area. This was no predator though.
In a flash three motorbikes broke around the curve and passed us. They were so quick all we could really catch sight of was three helmets and dust being thrown from the rear tires.
I had never been on the off-highway vehicle trail system that encompasses Brown Mountain, but on a weekend getaway we thought the family would enjoy running the four wheelers on a trail such as this. Over 33 miles of trail exists there, and even though there are plenty of bikes, all terrain vehicles, and Jeeps testing their skills and just enjoying the adrenaline rush of acceleration and maneuvering, the trails remained open enough where you were not constantly looking over your shoulder or peeking around the corners.
With the kids with us, we stayed on the easy trails. There are much more difficult tracks to take, and each trail marker has a symbol showing not only the difficulty of the run, but which types of vehicles are allowed to traverse the trail as well.
We spent several hours exploring just the main trail which was highlighted with turnoffs, steep climbs and descents, powdery dirt and exposed rocky outcrops. We stopped twice on the 12.6 mile ride, once for pictures near a large boulder, and once just to talk and take a five minute break.
The cool mountain air was crisp and refreshing compared to earlier in the week where the temps reached the lower 90’s and we soaked in all we could.
As far as the mountain goes, it is filled with mystery and history, and having both covered, seen, and studied the famous Brown Mountain Lights, I wondered just how they emanated from the mountain.
Even the United States Department of Agriculture acknowledges the floating orbs but the explanations are as much a mystery as the lights themselves. This being my first time actually on the mountain, I paid special attention to features that you just cannot see from afar during the night.
That evening, as we tended a fire near the small two room cabin we stayed in and melted s’mores over the flames; we recanted the tales of the mountain and others from the nearby area. We ate well, slept deeply, and continued a bond between ourselves and the land.
The Brown Mountain OHV Trail is located less than thirty minutes from Morganton, NC and requires a pass that can be purchased at the entrance.

So, What is your BEST DAY EVER? Kolpin Powersports wants to know! 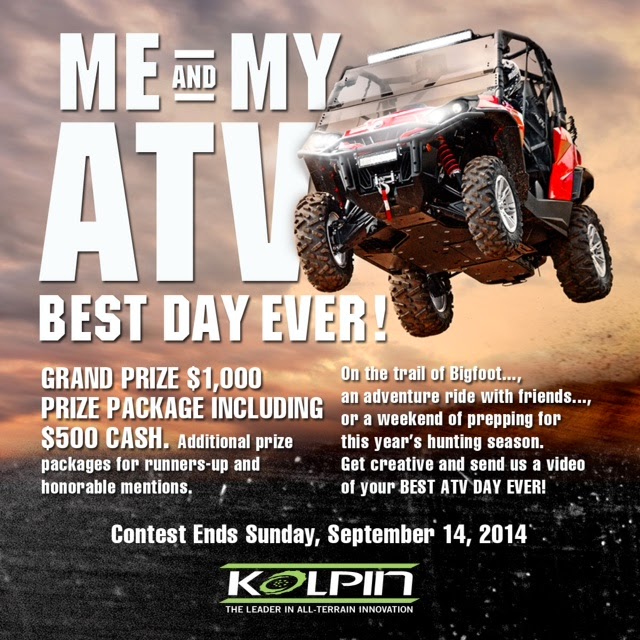 ME AND MY BEST ATV DAY EVER!!!
That title sounds like something you’d read in a friend’s Facebook post as a caption for an awesome photo or video, doesn’t it?  Well, it is actually, or will be soon, thanks to Kolpin Powersports.
On Friday, August 15, 2014, Kolpin Powersports kick-offed a social media video contest asking ATV fans to showcase their Best ATV Day Ever by submitting a video for a chance to win a Grand Prize pack from Kolpin worth $1,000.
The Grand Prize is $500 in cash plus a $500 Kolpin online gift card (coupon code).  But if you don’t win the Grand Prize, don’t worry, there are nine other prizes being offered, including four Runner-Up prizes of $250 in cash plus a $250 Kolpin online gift card, and five Honorable Mention prizes, which earns winners a $200 Kolpin online gift card.  Gift cards are only available for redemption at KolpinPowersports.com. 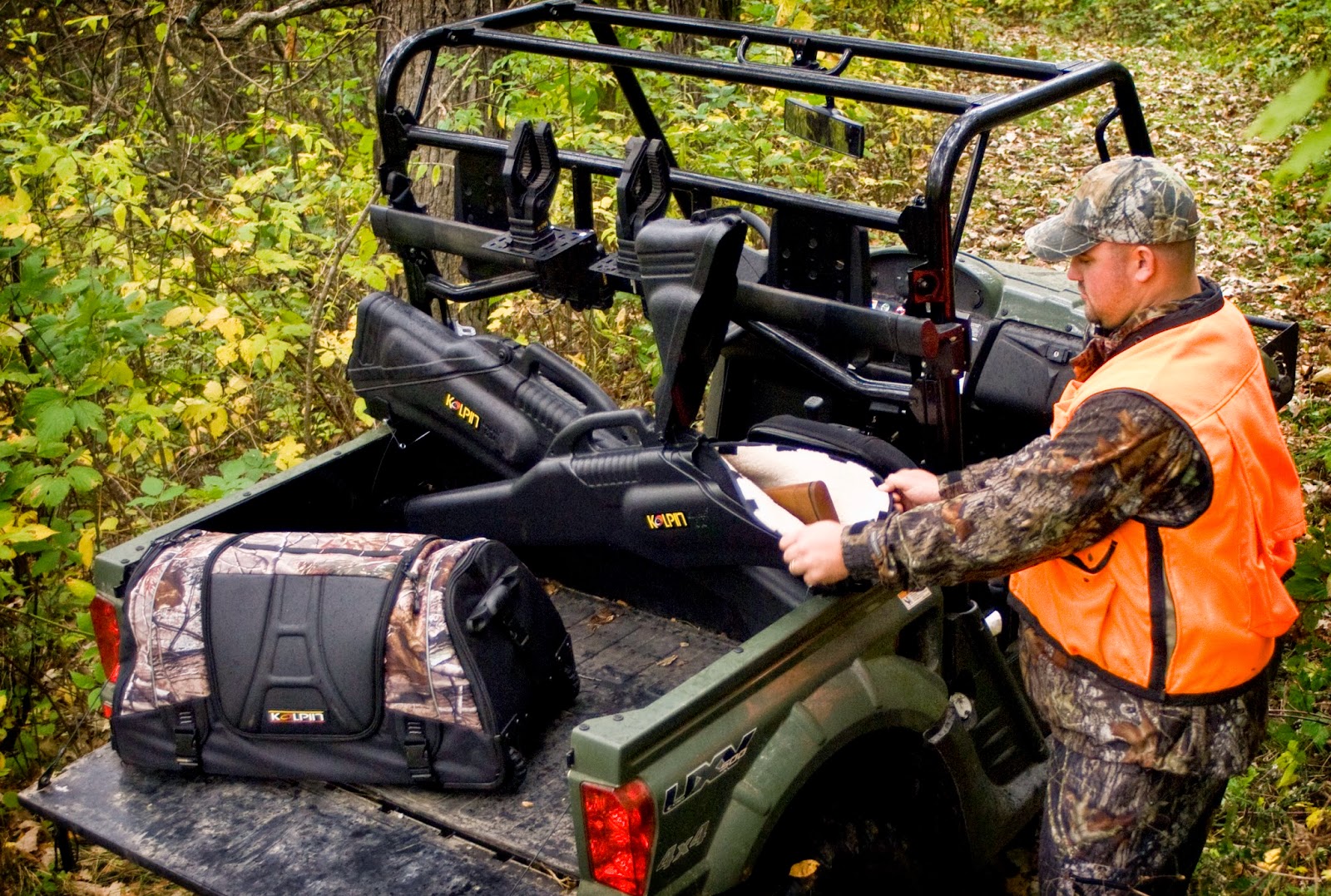 The contest has one round of voting and the winner will be determined by a combination of social media fan votes and a judge’s panel comprised of ATV and video buffs who will look for originality and video quality.
Here’s a BIG TIP for you:  once your video is posted, quickly give your friends the URL - email it, text it, post it on your social channels – heck, do everything possible to get as many people as possible to vote for your video. But be quick about it, because voting ends at 11:59 CST on Sunday, September 14, 2014. 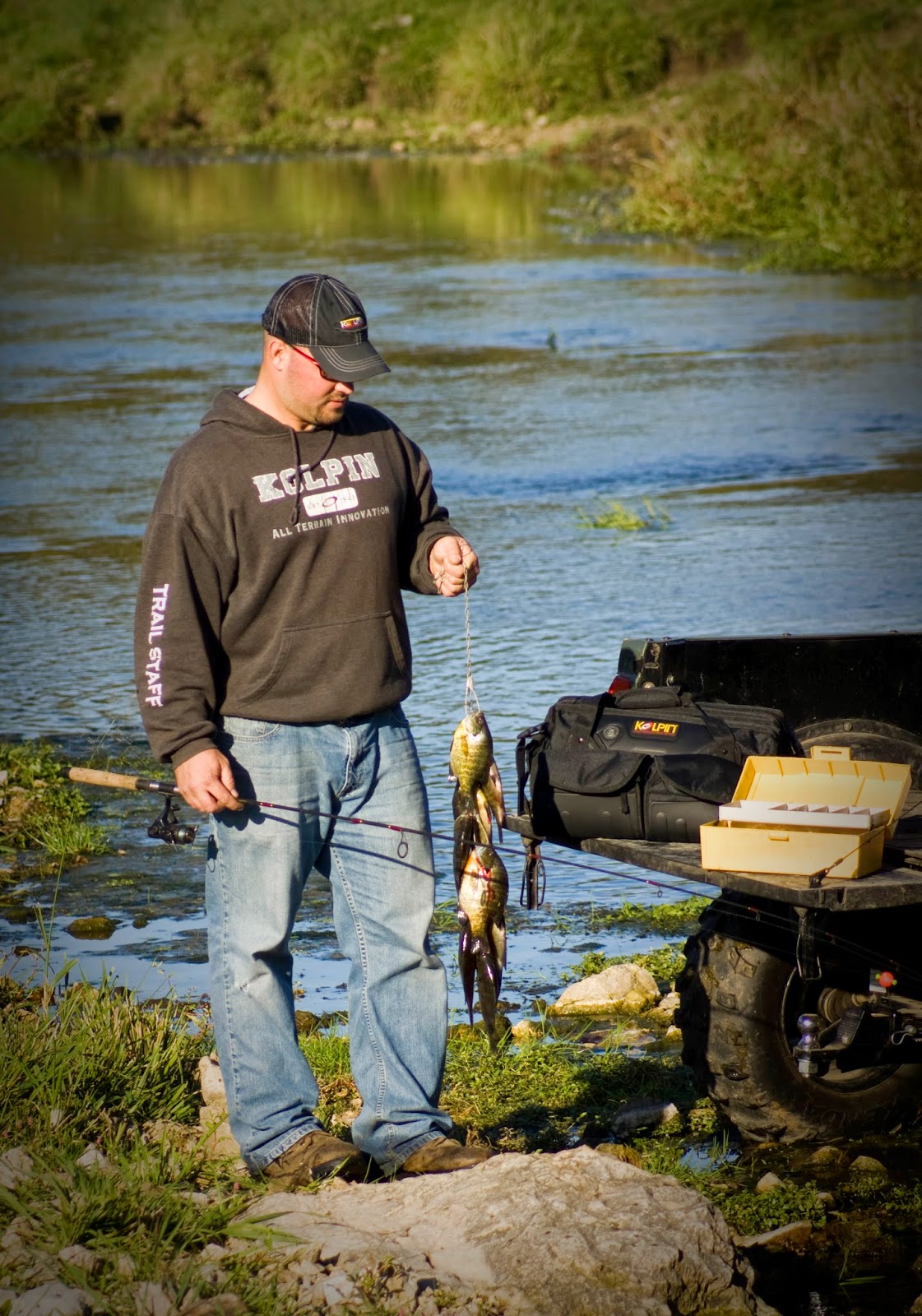 This awesome contest is sure to be entertaining, with hilarious, exciting or otherwise excellent videos, so even if you aren’t planning on making a video yourself, be sure to visit the page early and often to vote for your favorites!
If you haven’t heard of Kolpin Powersports, they’re the industry leader in ATV and UTV accessories, offering universal accessories that work with every brand of ATV and UTV. Kolpin has been around since 1943, so you can trust their products, and rest assured that they’re constantly innovating and engineering new equipment to add to their large assortment of other ATV and UTV accessories.
For more information about Kolpin Powersports, call them at 1 (877) 956-5746 or visit their website by clicking HERE.
Note: This is a sponsored post by Kolpin Powersports.
Posted by Bill Howard at 10:35 AM 1 comment: