Karen settled the sight of her Mossberg 500 12 gauge shotgun on the strutting tom as he worked his way toward the decoys.  Before she placed her finger inside the trigger guard, I can only imagine the thoughts going through her mind.  On opening day of turkey season in North Carolina, her husband Randy and she took a pair of Eastern Wild Turkeys at the same time from the same location.  Now they were together in Kansas chasing a Rio Grande, the only subspecies Karen had not taken in the wild turkey grand slam (Eastern, Merriam, and Osceola are the other three).   With Randy’s enthusiasm in teaching and Karen’s eagerness to learn, Karen had become an outdoors woman.
In 1991, Dr. Christine Thomas founded a program that later turned international called Becoming and Outdoors Women.  BOW as it is called, started in Wisconsin with 100 participants in the first workshop.  Now over 20000 women participate in events throughout the United States, Canada, and New Zealand,  amongst other locales.  North Carolina began their program in 1997.
The BOW program has even expanded in curriculum, and during the Big BOW weekend, North Carolina offers nearly 30 types of sessions.  North Carolina also offers Beyond BOW (BBOW) events where women learn advanced techniques and hunt for deer and birds, fly fish, and participate in outdoors skills programs.
This year, North Carolina will offer Become and Outdoors Diva, geared toward young ladies during a summer camp setting at Centennial Campus.  The Diva program is not part of the BOW program, but will introduce teenagers to different outdoor skills.  Information for both programs can be found at ncwildlife.org.
And back to Karen.  I can only imagine what she was thinking before pulling the trigger, but I can tell you exactly what she was thinking afterwards.  Karen Mabe became the first female from North Carolina to take the grand slam after downing the strutting Rio.  After several years of setting goals, arranging work schedules, and planning hunts, Karen and her husband were successful in their passion for the outdoors.  Meanwhile, I will continue my pursuit for the elusive FIRST turkey.
Posted by Bill Howard at 5:30 AM 1 comment:

Hunting is a Headache

Couple of Toms More Interested in the Real Thing Than My Decoys...

That's why they call it hunting.
Posted by Bill Howard at 6:57 PM 2 comments:

Three Beards and a Turkey Tale

Brooke Smith did not know what to think that first Saturday morning of April.  She was going on her first turkey hunt on youth day in North Carolina along with the crew from Hardwoods Inc. Productions.  If things went well, Brooke would get a shot at a nice tom (adult male turkey) and the crew would get some video footage for their upcoming season.
For Brooke’s age, she is a seasoned hunter.  Her father started her hunting at the age of 10.  When she was 12, she knocked down a large nine point whitetail.  It would be what some would call their ‘deer of a lifetime’.  However at 14 years old, she had never been turkey hunting, and this hunt was going to include a television crew watching over her shoulder.
Just prior to sunrise, her father Phil asked her to listen carefully.  She could hear the gobbles in the distance, but not too distant.  Her anxiety grew with the passing minutes.  Phil pointed across the field as several hens crossed in front of them.  Travis, one of the crew members, told her the hens were out of their roost and the toms would follow.  Over the next half hour, the hens began acting strange, spooked even, and took off out of sight.  The crew decided to take a short break.
A little later, one tom made its way in to the field.  “Diddy” she whispered with a deep southern draw, “I’m nervous!”
Travis and Casey, the other crew member, could not get a good video shot of the turkey at the angle the tom was located, so they waited a bit.  Two more toms strutted into the field coming toward the decoy.  One came up 35 yards away.  Shooting range.  Still nervous and shaking, Brooke leveled the Thompson Center Arms 20 gauge and tried to gain focus.  Aim for the red at the head, put the center sight between the outside sights, get them level…
“Bang!”  The tom flopped and jumped about.  Before the men could move, Brooke was out in the field trying to grab the bird.  Too fast and too furious for Brooke to get hold of, her father grabbed the gobbler by the head and neck.  The struggle was over.  As Phil congratulated his daughter, Travis noticed the beard was heavy and thick.  This is going to be a good bird he thought to himself.
As Casey came out with the camera, videoing the moment, Travis looked back down at the bird.  It was not a heavy beard, it was multiple beards.  He reached down and started separating them out.  Three beards.  “This is going to be a big bird!”
Scoring for turkey is based on their beard lengths and their spurs.  The National Wild Turkey Federation governs the official records.  Travis did a quick score on the turkey.  80.9375, a very good score.
That evening Travis pulled out the books.  He made a quick phone call to Phil.  “Phil, measure those beards again.  Brooke may have a very good turkey.”  Phil confirmed the earlier measurements.
Brooke’s turkey will place second all time in North Carolina for a female, and top thirty in the United States.  It will take sixty to ninety days for the score to be verified and processed.  Brooke, her father, and her hunting buddies will remember and tell of the experience for much longer.


Bill Howard is a Hunter Education and Bowhunter Education Instructor , a Wildlife Representative and BCRS Program Chairman for the North Carolina Bowhunters Association, and an avid outdoorsman.  Please forward any pictures or stories you would like shared to billhowardoutdoors@gmail.com.
Posted by Bill Howard at 5:30 AM 1 comment:

My daughter has always been interested in my hunting and fishing trips.  Several years ago, I carried her out to the field to let her shoot the old Ithaca 20 gauge shotgun I grew up with to get her used to handling it so she could go on a dove hunt with my dad, my son, and I.  The kick did not bother her, but she hated the BANG.  She wanted no part of gun hunting.


Over the last few years, she has wanted to go bow hunting with me, and she has helped me when I was practicing several times.  We purchased another bow for my son this Christmas, since he had outgrown the youth bow we had for him.  Naturally, it became a hand down to Julianne.  I had to adjust the draw length and draw weight for her, but at the time, she still could not pull the bow back.  I told her to keep practicing pulling it back and by spring when the red horse sucker fish make their annual run, she could go bow fishing with me.

Bow fishing in itself is a very unique style.  It is set up with a line attached to a heavy solid core arrow, tipped with a barbed point.  When aiming, the saying goes “aim low”, because the refraction of the light through the water makes the fish appear at a higher angle.  Think of looking at a straw in a glass of water.   The straw is not really bent, but it looks that way through the glass.  Also, unlike bow hunting, where you are trying to get a clean kill by hitting the vitals, bow fishing just requires you to hit the fish.  Your object is to get the fish on the arrow and then bring it in.

Well, over the first few months of this year, Julianne pulled and pulled and pulled.  Finally one night, she called me and my wife into the living room.  “Watch!  I can pull it back now!”  Her excitement caused my son to roll his eyes!

Just as they do every year, the sucker fish made their spawn in late March, and as I promised, the first night I saw they were running I carried Julianne out to the creek banks.  For a period of a week, and easily over a hundred attempts, and through several bow fishing arrows (the rocky bottom of the creek is not that great on the fish points) Julianne and I attempted to get her first take with a bow.  We went at night using a light, went during the day using polarized glasses, I honestly believe she probably went in her dreams while sleeping.  Occasionally she would take a break, and my son and I would get a few fish, then she would be at it again.

My regular job allows me to work four days each week, and during the sucker run, my weekday off was on a Friday.  I usually carry the kids to school on my day off, so I made my usual track.  After dropping my son off at high school, we still had an hour before Julianne was due at middle school.  I looked over at her and asked, “Wanna try one shot?”

She answered, but did not need to.  We ran out to the creek.  She strapped on her release while I was driving.  “Julianne, do you know what the saying is for snipers?”
“No, daddy.”

“One shot, one kill.  They cannot afford to shoot twice because the second shot will give away their cover.  We’ve only got time for one shot this morning, and there is no guarantee the fish will be here this afternoon.”
We walked down to the bank and spotted several fish.   They were a little too far, so I motioned for her to follow me upstream a few yards.  There we spotted one about ten feet out.  I had Julianne pull back her bow.  “Now?” she asked.  I whispered to her to take the shot when she was ready.  And ‘twang’, ‘splash’.  She backed up a few feet.

“You got one!”  She had not even noticed.  We both grabbed the line, and pulled it up on the shore.

Her persistence had paid off, and now there is another kid hooked to the outdoors.

Bill Howard is a Hunter Education and Bowhunter Education Instructor , a Wildlife Representative and BCRS Program Chairman for the North Carolina Bowhunters Association, and an avid outdoorsman.  Please forward any pictures or stories you would like shared to billhowardoutdoors@gmail.com.
Posted by Bill Howard at 5:30 AM 1 comment:

My buddy Brooke Smith with unofficial 2nd place atypical turkey by a lady for North Carolina, and top 30 in the US.  Congrats Brooke!!  I'm hoping to follow with the story soon.﻿ 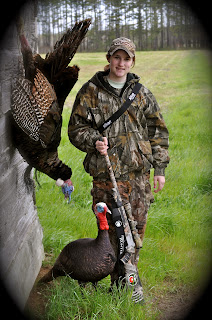