I keep a backpack I use on those ‘special’ hunting trips where I may be gone from home for several days in the wilderness.  I keep things such as an extra fall restraint system (in case my safety vest were to either get damaged or get used for its purpose, I do not want to vacate my hunt), an extra trigger release, several food items, flashlight and batteries, fire starter, paper maps, and…you get the idea.   It’s my survival pack in many ways.  One thing I keep in the pack is an emergency water filter system.  The one I use filters up to 20 gallons.  By my calculations, that will get me by for close to three weeks if something were to happen.

Why would I need a water filtration system?  One thing to keep in mind if you were to truly be in an emergency survival situation is you have to stay alert and sane.  Food, water, and shelter are the necessities.  While food can be taken either by hunting or by picking proper plants, and shelter can be made, water is a little different.  Yes, I can find a stream in the mountains.  What I cannot do is see whether the water is safe to drink.  I can build a sill, but the water supply can be very limited in dry situations.  And remember the alert and sane part?  If you become sick from water born bacteria and you are lost or stranded, how alert and sane do you think you will be?  Hence the need for water purification.  Options include tablets or filtration systems.  I like the filtration systems due to the number of uses.
I was recently contacted by Ben Seaman of Eartheasy.  Eartheasy is the official launch partner for LifeStraw in the U.S.  LifeStraw is a water filtration system for use by hikers, hunters, campers, and emergency preparedness.  LifeStraw was first introduced in 2005 and accumulated many accolades and awards for its uses in disaster situations and third world sanitary conditions.  Ben asked if I would like to review the product for its U.S. launch and after a little research, I was more than anxious to test the LifeStraw.  Like I mentioned before, I keep a water filtration system currently.
Be sure to follow this blog for your chance to win a Lifestraw from EarthEasy! 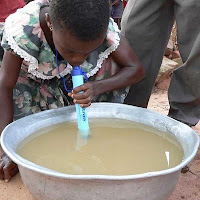 First, some technical information from LifeStraw and Eartheasy:  weighing only 2 ounces, LifeStraw can filter down to .2 microns which includes 99.9999% of bacteria (such as salmonella and vibrio cholera) and 99.9% of protozoa (such as entamoeba histolytica).  It cannot filter heavy metals or viruses or desalinate water.  Here is what I find impressive; LifeStraw is tested to filter 250 gallons or more!  The filtration system I have only does 20 gallons.  In other words, LifeStraw could be used to filter water for nearly a year for a single person in an emergency situation.
Now, there is the hype from Eartheasy and LifeStraw.  Of course, this is supposed to be my review, which means my tests would have to be run.  Since I keep the system for hunting, I decided to test the LifeStraw in situations I could encounter while on a hunting excursion. 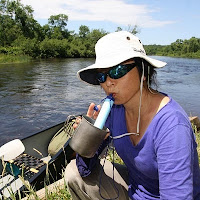 First thing, the LifeStraw packaging is TOUGH.  I thought it would be a ‘tear open’ type wrapper.  Nope, needed a knife.  I suppose this is good to prevent contamination prior to first use.  I tried it in regular cup of water first.  When trying to get the water through the straw, it takes some powerful sucking initially.  Once I had water flowing though, it was pretty easy to continue drinking.  The main reason I tried it on a regular cup of water was to see if there was any taste associated to the LifeStraw.  Water tasted the same whether drinking from the cup or through the LifeStraw.  Once you are finished drinking, it is recommended to blow back through the straw to clear the filter.  Again, this took some power. 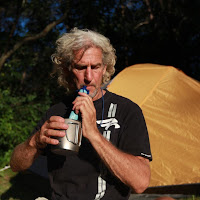 The second part of the test was to drink from a nearby stream.  The straw worked the same as when drinking from the cup.  I could taste the stream water.  Tip: Do not lie next to the stream bed in order to drink; you get wet!  It is recommended to use a cup to dip into the stream or body of water and use the LifeStraw in it instead.  Here is where my other negative shows up.  The LifeStraw has a larger diameter than a standard plastic bottle opening (the type that a soda or bottled water comes in).  It fits fine in the larger diameter hiking type bottles.  I usually use bottled water and put those in my backpack.  Remember the knife I used to open the wrapper.  It was used to simply cut the upper portion of the water bottle off, creating an improvised cup.
So to recap the negatives: The wrapper is tough to open, the water tastes the same going in as it does coming out, and it is larger than a standard bottled water bottle.
With that being said, the positives completely outweigh the negatives.  The LifeStraw has been tested to a MINIMUM of 250 gallons, can be stored a MINIMUM of 3 years, and is in the same cost range (under $20) of filtration systems that provide much less filtration volume (again, the one I own is good for only 20 gallons).  It also filters out more bacteria and protozoa than my current system. In fact, even the water purification tablets did not clean the water as well as the LifeStraw (research from reading the specs on a couple of water purification tablet bottles).   I find it as a must buy.  In fact, the LifeStraw will replace the water filtration system I currently have.   Not only is it great for the outdoors, hiking, camping, fishing, and hunting, it provides a great tool for disaster relief and emergency management.
Hey, you may want to get one for each member of the family.  It will be more than handy during the coming Zombie Apocalypse and after all, 2012 is just around the corner.

LifeStraw can be purchased from EarthEasy here.
Read Bill Howard's Outdoors: Zombies, the Rapture, and the Outdoors