Brian was in the stand early that Monday afternoon.  For the last hour, he watched as a small buck and doe grazed in the field in front of him.  They were skittish, seeming to understand something was not quite right.  However, the wind was to Brian’s favor and try as they might, Brian’s scent would not be found in their direction.
Then, in just a matter of moments, the field was populated with another four bucks and one more doe.  Brian sensed his target would be showing himself soon.  After all, Brian had the ‘big one’ on camera at consistent times since he began scouting several months earlier.  But the story does not end here, nor begin here.
Brian first learned how to hunt deer when he was 8 or 9 years old.  His uncle, Jesse Lennon, ran a household of 13.  Uncle Jesse taught Brian how to hunt.  Hunting was a necessity for the Bladen County family as a means of survival.  The deer meat provided many meals for a family of that size.
About fifteen years ago Brian took up bowhunting.  He appreciated the technique and it provided a way to hunt a longer season.  Just six years ago his mindset changed.
By providing for his own family, the deer meat was not as much of a priority in his hunting excursions.  He became much more serious about bowhunting and his chance to come closer to the game he was pursuing.  He also began managing his land and game to allow for a healthier, stronger, more mature herd.
His management paid off.
The opening weekend of bow season in 2010, just three years after he began his plan, Brian connected on a mainframe 9 point whitetail measuring 123 inches.  Pope and Young record book takes entries at 125 inches and larger net score.  Just a couple of inches kept Brian’s efforts from making book.  But all was not lost.  In fact, everything was working out perfectly.
Opening weekend of bow season in 2011, Brian was again in pursuit.  Proper scouting and management techniques once again paid off.  Brian connected on a 10 pointer.  This one measured 138 inches, easily making it one of the bigger deer taken in North Carolina during the year by bow, and making Pope and Young record book.
Now, here in 2012, Brian was waiting.  Brian supplemented his herd with a mineral site throughout the year.  In June, Brian began putting out corn to offer another food source and establish a routine for the deer that grazed on his land.  His trail cameras showed a buck developing a huge crown.  Brian recognized the deer.  It was a nice 8 pointer the previous year.  He passed on it when he took his record book buck.
So Brian waited in his lock-on stand, five bucks and 2 doe were near him.  He knew the big one should be showing up soon as he did each day on the camera photos.  He anticipated a splendid opening day just a couple of days earlier, to the extent of having a friend there to film the hunt.  Unfortunately, two different storms passed through the area late in the day.   When lightning started flashing, the linesman for Piedmont Electric realized it was time to go.  The buck would have to wait for another day, but he would not wait for long.  This would be the day.
The monster stepped out and moved to the corn.  Brian drew his Mathews Z7 Extreme bow armed with a Rage 2 blade 100 grain mechanical broadhead at 5:12pm Monday, September 10th.  Just twenty one yards separated Brian from the trophy he had watched for over two years.  At over 300 feet per second, the twenty one yards was traversed quickly by the arrow as it hit its mark.
Brian Rhew paid tribute to the 192 pound Orange County buck shortly afterwards.  The mainframe 9 pointer with 3 sticker points measured 146 7/8 inches green (green means the score is not official yet as the rack is required to dry for 60 days before an official measurement can be taken).  Now Brian had a once-a-lifetime trophy and a freezer full of venison.  Uncle Jesse would have been proud.
Posted by Bill Howard at 7:00 AM 2 comments:

How-to Set Up a Trail Camera

Where is Our Society Headed?

I interviewed a young lady the other night who had just taken one of the largest bucks in velvet taken by a crossbow in North Carolina.  One of the worries during the interview was negative publicity she may receive.  Her husband had taken several record book deer in the past and had commented to me that he did not want her to go through the same thing.
While protesting against those with different beliefs and values is an important part of our society, limits can be pushed which does more detriment to both parties than good.
I was contacted by the North American Hunting Club staff a couple of weeks ago in regards to one of their celebrity staffers, Melissa Bachman.   Melissa was scheduled to be on a new television show featuring several people from different walks of life in a survivalist situation (this is the best I could tell from the information I received anyway, as it is in development).  A large group of anti-hunters started a campaign to get her kicked off the television show by protesting the network, threatening to boycott any advertisers, and harassing Melissa.
I met Melissa back in March of this year and interviewed her for a story in Bow Adventures Magazine a couple of months ago.  Melissa is a kind and knowledgeable person and an asset as an ambassador for the hunting public.  Yet, she was released from the show because of the protests.  One comment from a protester that was placed publically online consisted of “We got you fired!  Bwahahahah!”  Other comments consisted of she should be killed like the animals she hunts and some more graphic depictions as well.
Another lady I interviewed back in February, Michelle Leqve, the first lady to harvest a polar bear with a bow underwent the same harassment shortly after I had talked with her.  In a pleading call she asked, “Bill, what can I do?”  She had protesters not only calling and messaging her employer to get her fired; she began to have outright lies sent in to her employer about things other than hunting in the attempt to have her released.  It was later determined that the bulk of the harassment was coming from an anti-hunting group based partially in Europe.  She had to change her phone number due to the hateful, threatening messages she was receiving.  She was trashed on social media outlets and became the subject of several blogs, including one for a Canadian newspaper (who subsequently took portions of the writer’s posts down).
Last week I shared a review of MeatEater, a book by Steve Rinella released on September 4th.  In his promotional book signing tour he was confronted by a vegan, in other words, someone who does not believe in hunting or eating animals.  The gentleman asked Rinella was hunting for meat just a rationalization for the murder of innocent creatures.  Rinella held his composure well, and responded to the gentleman that he believed it was less a question and more of a derogatory statement, but he would answer the question anyway.
Rinella went on to point out that over the time our species has inhabited the Earth, that only over the last couple of hundred years has not hunting even been a factor.  Rinella believes humans are actually going more against nature by not hunting than hunting as we are a species that contains canine teeth which is only found in predatory animals.
Rinella handled the situation with tact and information and the other gentleman responded in kind.  In the end, they each agreed to read each other’s information, the gentleman would read MeatEater and Rinella would read a pamphlet on veganism.  No threats and no discourse.  The conversation remained a conversation without threats, harsh personal attacks, or minor assaults.
In the words of many before me, ‘Can’t we just agree to disagree?”

A few years ago after the opening day of dove season I taught my oldest son how to clean a bird.  Cleaning animals is not my favorite part of the hunt, but it is necessary if you are going to eat what you kill.  It was messy, but we got all the dove cleaned, marinated them overnight, and that Sunday we had a feast.  If I remember correctly, we had about eight kids in the neighborhood over at the house trying their first dove meat.
Since then we have had a staple of wild game meat, ranging from buffalo to bear to deer to alligator.  My son even cleaned and fried a squirrel he had taken a couple of years ago.  Again, it was messy, the hide was ripped to pieces and the grease from him attempting to cook his own meat clogged the drain pipe in the kitchen, but I was proud of his effort.
A few weeks ago I was forwarded a book titled “Meat Eater” by Steve Rinella.  Rinella is the host of the television show of the same name on the Sportsman Channel and was the host of the show ‘The Wild Within’ on the Travel Channel.  If Rinella is anything, he is not an apologist. 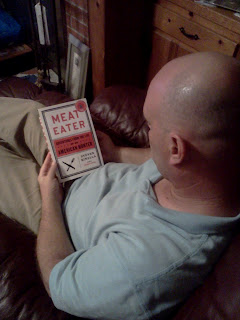 Rinella believes what you kill, you eat, and what you eat, you kill.  Part biography, part philosophy, part history, Rinella explains what a true outdoorsman is supposed to be.
Rinella began as a trapper in his youth, thinking that a great life would consist of living off the land.  He studied and idolized such people as Davy Crockett.  He delves into subject matter consisting of why frontiersmen such as Crockett did what they did and how they survived.
He explains how one can become so consumed by the end game that shortcuts, or ethics, can be compromised.  He then explains how those same mistakes helped him mature and appreciate nature.
In one particular chapter, Rinella discusses what many label as a hallmark of fishing.  Rinella always loved fishing and enjoyed showing others up at times.  After being convinced a true angler can only reach the top after fishing for bonefish in the flats off of Mexico, Rinella and his brother hiked and hitched south of the border.  Rinella explains how they survived off the land and water for much of the trip.  At one point, Rinella has an epiphany.  Here they were, fishing on hallowed waters for prized game fish, and starving.  The only meals were the ones they caught, and bonefish just did not make a great meal.  How did his passion turn into something where he was hoping something edible would grab the line rather than the targeted species they trekked so far for?
The book is enlightening and real.  It offers a reason not to trophy hunt but rather a reason to hunt for sustenance.  With wit, insight, and great storytelling, Rinella makes contact with the reader in ways that even a non-hunter can understand.  Bringing in his personal accounts of childhood and relating historical tales of early America makes Rinella the perfect hunting partner or fishing buddy, even if he is not there in person.  And based on his experiences and wisdom, I would bet he would be the first to grab the skinning knife at the camp so I could stand back and watch my least favorite part of the hunt.
Meat Eater went on sale September 4 and can be found at most book sellers.
Posted by Bill Howard at 7:00 AM 1 comment: