With Thanksgiving right around the corner (acutally just down the street), I want to give thanks to the readers and followers of this blog.  It has grown exponentially over the last 6 months. 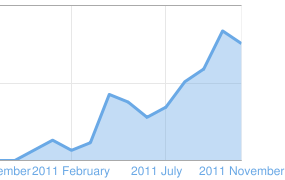 As you can see by the chart, with a third of the month left, we about to shoot past last months numbers over the next couple of days.

I want to also take this time to introduce a new endeavor, BowAmerica.  BowAmerica is an e-magazine for bowhunters.  I have already received commitments from several top writers for the monthly e-magazine.  It will feature departments on traditional, compound, bowfishing, women bowhunters, do-it-yourself, how-to, gear reviews, and health and fitness as it pertains to bowhunting.  These departments will be in each issue, so no matter what your interests are in bowhunting, there will be stories for you.  There will also be feature articles on hunts, scouting, and game knowledge.  But, here is the best part!

Just fill out the form below and confirm on your email and BowAmerica will be delivered to you each month!
Again, thanks!
Posted by Bill Howard at 8:19 PM 2 comments:

My Most Memorable Hunt

I have always considered myself as a hunter.  My passion in my younger days consisted of a shotgun and a sky full of dove.  I was a decent shot; however my dad was a fantastic shot.  I had seen him take a limit of birds with only one box of shells.  Add in the fact my grandfather hunted big game around the world and you can see I could easily be intimidated by my family’s hunting prowess.  In October of 2005 my grandfather, Papa as he was called, left this world to be in a better place.  My dad had never been fortunate enough to go on a big game hunt with Papa, so that Christmas we decided we would a special hunt in part remembrance and honor of Papa, and in part to do something together that Papa and Dad never had.
We debated over different species based on cost, distance, and timing.  Eventually we decided on something I would call an American treasure.  We chose the great bison, a truly magnificent beast with a history like no other animal in North America.  The buffalo, as it is also called, is a herd animal, once nearly extinct but now with sustainable populations that with conservation efforts should never have to worry about endangerment again.  We felt like this would be a fantastic first choice of a shared big game hunt.  In simple terms we would need to spot a herd, and take an animal. 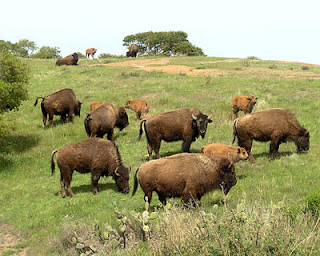 North Dakota became our destination, as we found a guide who had a large land mass with free ranging bison occupying the grounds.  Pingree, North Dakota to be more precise.  Although it could be found on the map, we later found out it consisted of nothing more than a diner and a crossroad.  We would take the hunt in November, during the Thanksgiving week, allowing me time for the hunt without exhausting all my vacation days at work.

Now I was searching for an identity in hunting.  Again, when you grow up listening to the stories shared by my grandfather, and watching my dad nearly limit out before a bird ever gets by his zone of fire so you can pull the trigger, intimidation is immense.  During the winter of 2005 I was introduced to the compound bow.  After taking just a few shots, I felt a fire inside.  Wow!  This is what I wanted to do.  This is how I wanted to hunt.  I just needed to learn how and be good enough with the bow to hunt ethically. 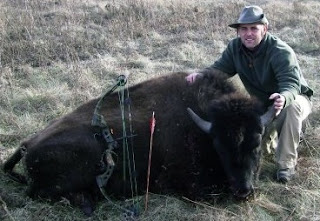 
Bill Howard writes a weekly outdoors column for the Wilson Times and Yancey County News and the bowhunting blog site GiveEmTheShaft.com. He is a Hunter Education and International Bowhunter Education instructor, lifetime member of the North Carolina Bowhunters Association, Bowhunter Certification Referral Service Chairman, member and official measurer of Pope and Young, and a regular contributor to North Carolina Bowhunter Magazine.
Posted by Bill Howard at 7:00 AM 3 comments:

It's the Best Time of the Year!

I listened to the radio intently last Friday evening on the drive home from work.  My university of choice was partaking in their first official basketball game of the season under a new leader.  It was an exciting time.  Here this team was, playing much more like a team than they have in some time, with a brand new coach that seems to have changed the mentality overnight.  And this was coming off a not-so-exciting victory in football over the arch rivals the previous weekend!  (Before I get hate mail from this, I was a UNC fan prior to college, and even applied for journalism at Carolina.  However, NC State took me first, and I quickly converted over to the red and white.)  As the saying goes, this is one of the best times of year for sports.  Football is nearing its championships and basketball is just beginning.

Well, this is an outdoors column, and other than football being played outdoors (and basketball outdoors when played on an aircraft carrier), there is not much in common between the outdoors life and the sports life.  However, the fall does bring an excitement to the outdoors just as it does to sports.

Based on the sports and outdoors analogy, I would have to compare football season and deer season together.  Deer season is in the final run.  This is when the big boys step up.  Yes, the rut is on.  The championship caliber deer are showing themselves.  While I am usually happy to take a doe early in the season, I have to hold back the temptation at this point, just to see if one of those big bruisers with his crown of brown is on the same course. 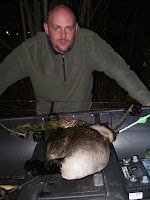 Then you have basketball and waterfowl.  Coming in to the weekend, I had to constantly battle my inner voices to decide; bucks or ducks?  I have waited all year for duck season to come around once again, yet it is like trying to decide whether to watch LSU and Alabama in football or UNC and Michigan State in basketball.  You know both are going to entertain you.  Yes, you could ‘flip back and forth between the channels’.  But if you are like me, I just do not want to miss that score! 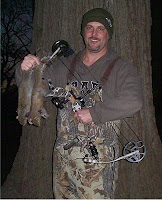 Then you have squirrels, raccoons, and opossums, oh my!  It compares to hockey in my book.  They are there, and if you get a chance you will go take it, but it is not the top choice, or even second for that matter.  It does not mean you will not make a mental note to come back later though. 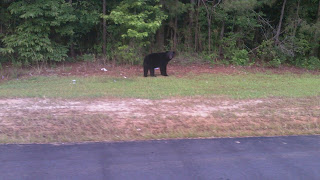 So where does the bear fit in?  Pretty much any where it wants to!  Have you ever told a bear that it is just not welcome?  Bears make themselves welcome even if I cannot come up with a good sports tie in.  So Mr. Black Bear, you are in a class all your own!  Now when you get done browsing through my backpack for honey and peanut butter, would you mind passing the chips?  We have some game to hunt.
Bill Howard writes a weekly outdoors column for the Wilson Times and Yancey County News and the bowhunting blog site GiveEmTheShaft.com. He is a Hunter Education and International Bowhunter Education instructor, lifetime member of the North Carolina Bowhunters Association, Bowhunter Certification Referral Service Chairman, member and official measurer of Pope and Young, and a regular contributor to North Carolina Bowhunter Magazine.
Posted by Bill Howard at 7:00 AM 1 comment:

Here is the Coast2Coast Outdoors rebroadcast of this week's show with information and commentary on blue tongue and EHD disease in whitetail deer.  RB Wright and Kerry Mackey hosts the weekly show as well as their own blog sites (just click on the names for the links).

Be sure to catch Coast2Coast Outdoors each Monday at 9pm Eastern time.
Posted by Bill Howard at 10:32 PM 1 comment:

Diseased Deer in North Carolina - No Threat to Humans

Perfect conditions can mean vastly different things.  Perfect conditions for deer hunting would include several days of rain followed by the first really cold spell.  However, this summer provided perfect conditions for something else.  Across North Carolina, the hot dry summer followed by the onslaught of rain from storms such as Irene provided perfect conditions for flies and gnats.  These insects are the carrier for the virus that inflicts hemorrhagic disease in deer, cattle, and sheep amongst other animals.
Hemorrhagic disease encompasses two sub-infections, known as epizootic hemorrhagic disease (EHD) and blue tongue disease, is well known in hunting circles and has been spotted throughout North Carolina this season.  An infected deer may lose its fear of humans, as it becomes obsessed with finding water and shade in order to combat one of its top symptoms of high fever.  Symptoms such as cracked hooves, bloated, thin, weak, or severely underweight deer, especially if it has suffered for an extended period of time are common.  Swollen lips and tongues with a blue color, hence the name blue tongue disease, may be seen but are not necessarily present.  Often dead deer will be found near rivers and bodies of water.
The last major outbreak was in 2007, with five notable outbreaks since the 1980’s.
Deer presumed to be infected and harvested by hunters should not worry, as the meat and hide are still safe to eat and use.  The disease cannot be transferred to humans.  The only passage of the disease is through midges (flies and gnats).  The North Carolina Wildlife Resources Commission is requesting any deer displaying such symptoms, or found dead or dying, be reported to the Division of Wildlife Management at (919)707-0050 or wrccomments@ncwildlife.org.
As mentioned in many arguments as a reason to hunt, diseases that can damage herds such as hemorrhagic disease are primarily found by hunters and outdoorsmen.  In 2007 for instance, an outbreak of blue tongue disease was initially spotted by hunters scouting land near the Asheville area.  Hemorrhagic disease has been known to strike deer populations with as much as a 30% mortality rate in the herd in local areas.  You can see why it is important to be reported.  If a deer survives through the disease, it develops immunity to future outbreaks.
Counties affected by hemorrhagic disease this season include western counties such as Yancey and Cherokee, and northeastern counties such as Halifax, Edgecombe, Northampton, Bertie and Gates counties.
Bill Howard writes a weekly outdoors column for the Wilson Times and Yancey County News and the bowhunting blog site GiveEmTheShaft.com. He is a Hunter Education and International Bowhunter Education instructor, lifetime member of the North Carolina Bowhunters Association, Bowhunter Certification Referral Service Chairman, member and official measurer of Pope and Young, and a regular contributor to North Carolina Bowhunter Magazine.
Posted by Bill Howard at 7:00 AM 5 comments: