But, I carried the Old Town Predator 13 kayak out to the coast over the weekend with intended targets being Speckled Trout and Redfish. I got skunked. Well, kind of anyways. I had enough forethought to take along a bottom rigged pole and fished one of the bridges near Beaufort later in the morning.

I also knew I wanted to get some video while out there. I messed up. It seems I had the cameras on the wrong setting. Instead of video, I had them set on time lapse. In other words, they took a frame every 5 seconds.

So here is my effort in which I brought in around 50 fish in a few hours compiled into less than two minutes:

The Spawn is On!

The little town of Weldon is nothing special. It has a population of just over 1300 people. It’s closest metropolitan area lies a few miles away in Roanoke Rapids, which in and of itself would be little known if not for being the closest North Carolina city to the border of Virginia on Interstate 95. 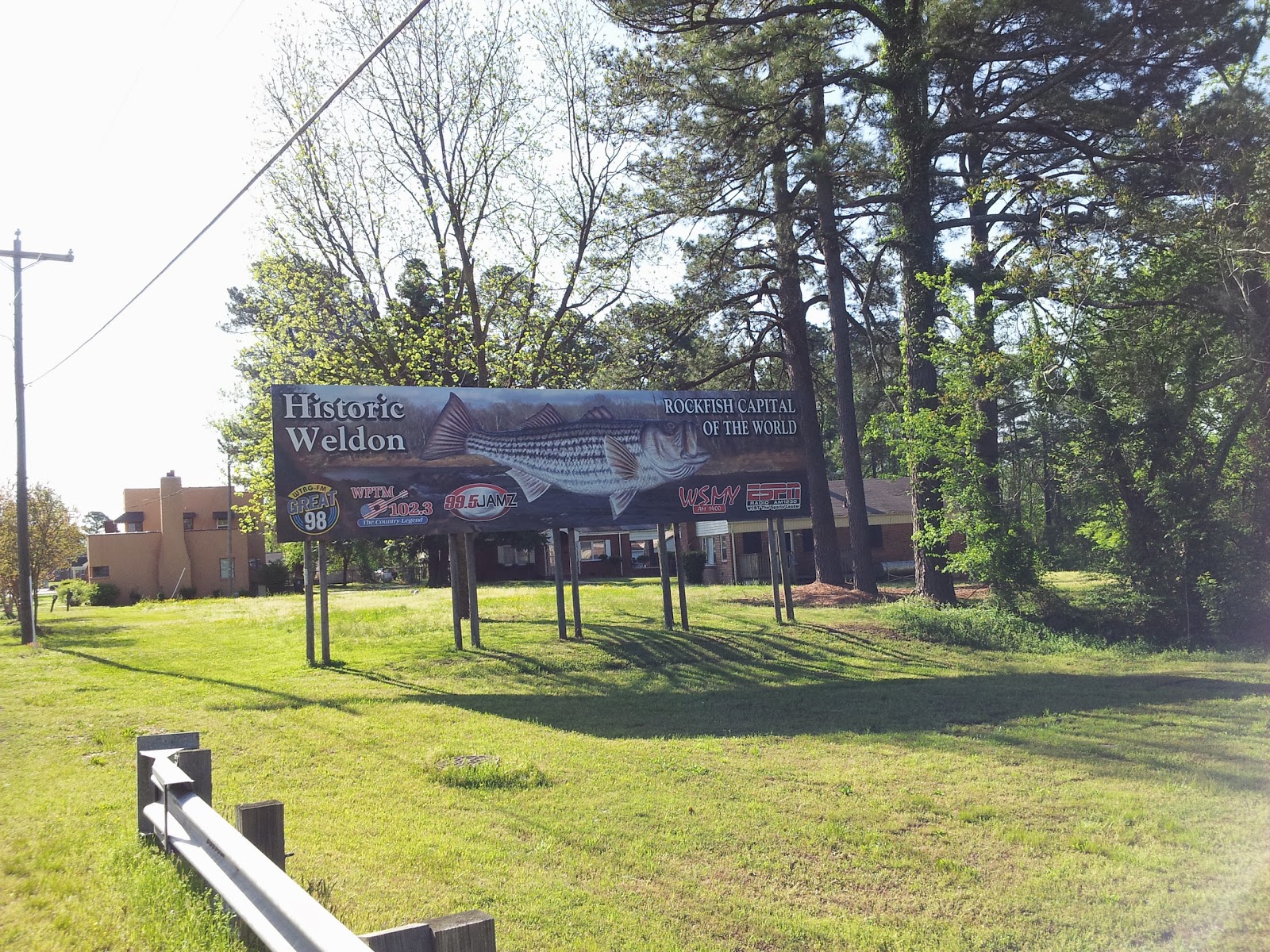 However, for about six weeks, something magical happens. The one North Carolina Wildlife Boat Access into the Roanoke River will display over 100 boats. In fact, during the peak time, there will be one boat for every ten people that reside there.
It usually coincides with the turkey season, but that is just coincidence. The occasion for the mass influx of anglers is the spawn of the striper. Weldon becomes known as the ‘Rockfish Capital of the World.’ It is a mantle which Weldon wears with pride.
As you turn east from Roanoke Rapids you are greeted by sign after sign of ‘Live Bait’, ‘Striper Bait’, and ‘Bait for Sale.’ A billboard thrusts itself from the side of the road with a striped bass running the length with five radio stations listed across the bottom. 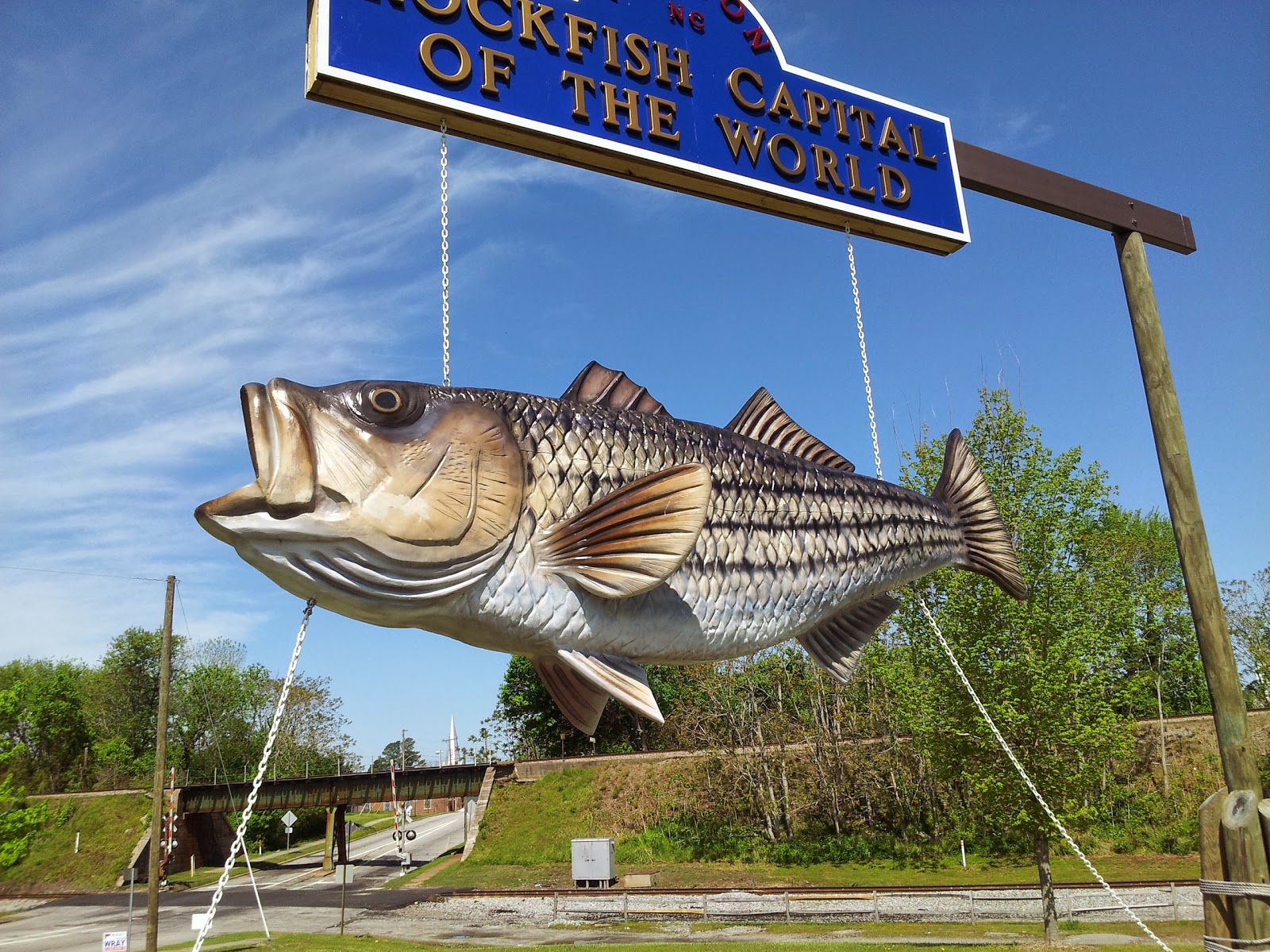 Once you cross under the train tracks, you begin to realize you are really close. A gigantic twenty foot striper chasing some impressive sized shad hangs under the framework displaying ‘Weldon, NC Rockfish Capital of the World’ in gold letters on a blue background.
Below the taxidermist’s sculpted Rocky as he is called, shows a map of the river and tells the story of Rocky the rockfish. It tells the story of a man named Jackson who hooked into a fish that once he got it to break the surface was as long as his boat. Rocky was strong enough to pull his boat against the raging force of the river and after two hours Rocky was able to break free.
While the story may be nothing more than a fable, it does give a sense of the importance of this fish to this community. After all, the fish that come here each year swim thousands of miles just to get to these mating waters. Fish tagged as far north as Long Island reach this sacred stretch of water just thirty days later.
It is amazing to see.
It is estimated nearly 3 million fish bottle up in this part of the Roanoke River during the spawn. Both the rapids and a dam a little further up the river prevent the striped bass from successfully swimming past. 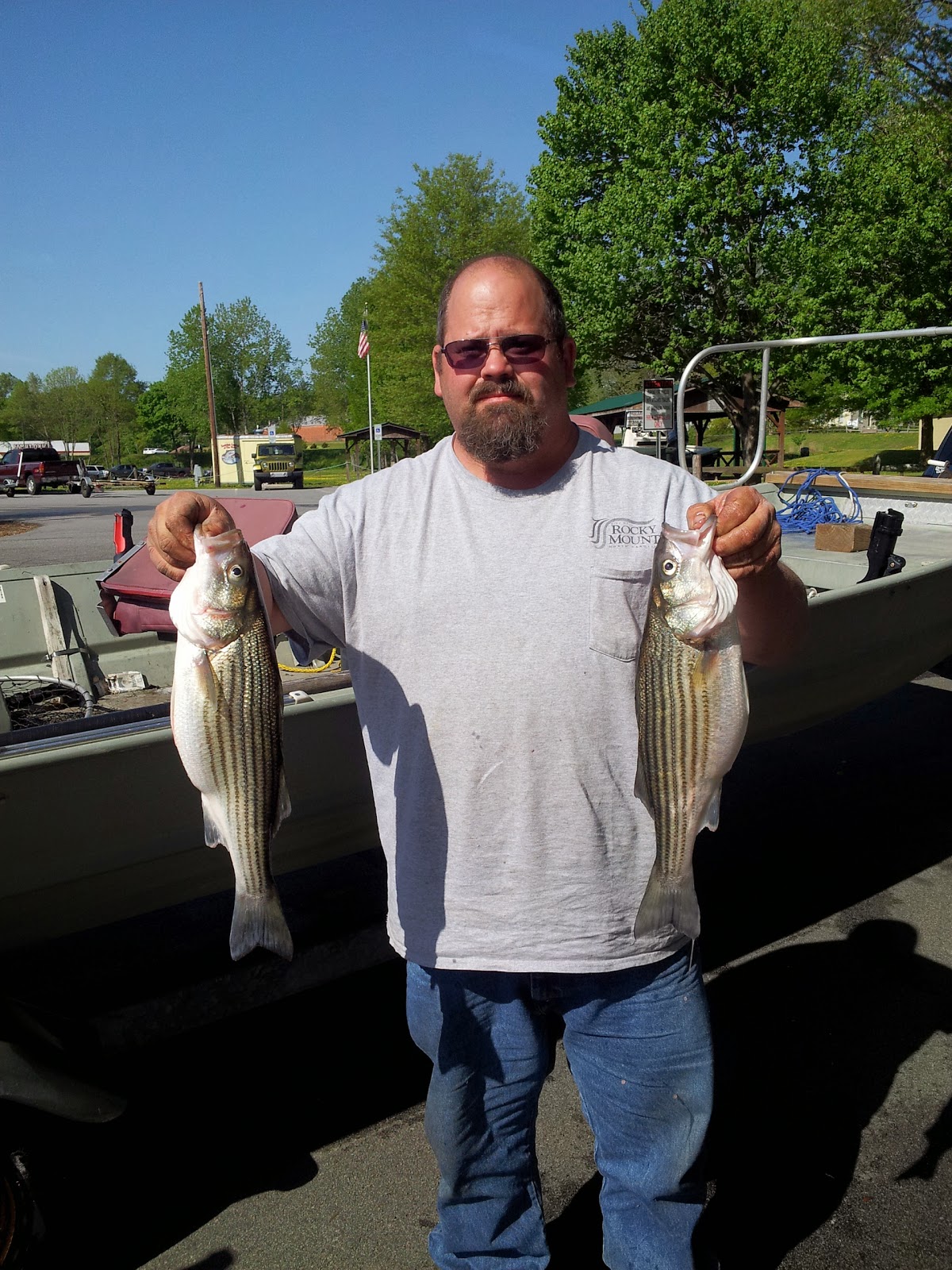 While you can catch all you can stand until your arms are weak, it is possible to catch as many as a hundred in a half day; you cannot keep all of them. In fact, the regulations are pretty stringent. First, you must use a barbless hook or have the barb bent downward. You can only use one hook. And, you can only keep two fish. There is an abundance of smaller fish in the two to three pound range, but every now and then you can hook into a monster, though not the size of the aforementioned Rocky. Regulations also dictate the size may be 18 to 22 inches or larger than 27 inches in length. If the fish falls between 22 and 27 inches, it is considered the ’slot’ and it goes back in the water. Also, of the two you can keep, only one may be over 27 inches in length.
The North Carolina Wildlife Resources Commission keeps a pretty good eye on the matter. I usually can determine when the spawn is heating up be watching the NCWRC’s Coastal River Fisheries updates (this can be found at www.ncwildlife.com) starting in April of each year. For instance, for this story, I noticed in the report where the Wildlife biologists collected 100 striped bass on April 14, and on April 21 they brought in 287 rockfish. A little internet scouting can pay big dividends.
While I was unable to fish the river during this trip, I enjoyed watching the happenings just the same. The dock resembled more of a port rather than a boat ramp due to the traffic and sheer numbers of boats in the immediate area of the ramp. At one time I counted 16 boats within a 300 yards stretch of the river, all weaving around each other trying to either fish or work their way up or downriver depending on whether they were coming in or going out. 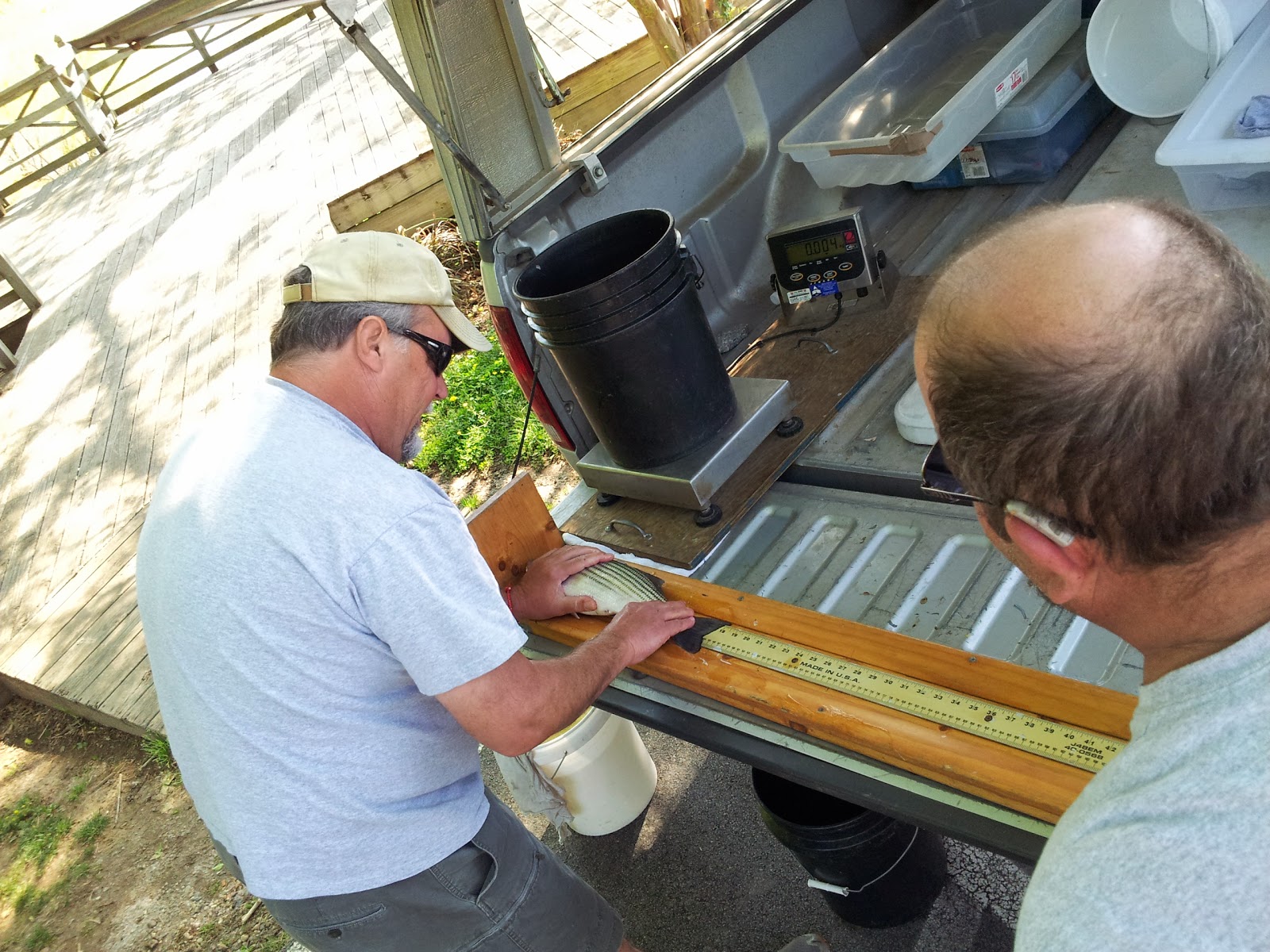 As each boat exited the ramp, two creel clerks who worked for the NCWRC would check with each angler on their success. With only two keepers allowed per person, they would measure and weigh each fish. They would also get a near number of total fish caught, how many were ‘in the slot,’ and what types of bait the anglers were using.
Very seldom did a fish kept fall in the illegal-to-keep range. The anglers know how important this fish and how special the annual rockfish run truly are.
Posted by Bill Howard at 7:00 AM 2 comments: