I have seen signs of a huge deer each year for the last several years. He has haunted my dreams, occupied my mind, and teased my patience. Although I have stayed focused, he remains a ghost.
Just like any deer that is not running around during the rut, he can be patterned. This one though, he has mostly been a mystery. That is until two years ago. I started keeping a hunting log and discovered a few key facts. He only makes himself seen once per year. Yes year. Last year was the first time I was able to capture him on camera.
Prior to the grainy infrared trail camera shot I had only seen his tracks. They were deep and wide and flowing. Yes, just like the fountain in the popular children’s hymn. What I mean by flowing is they would appear out of nowhere, run the course for a bit, and then they would vanish. Even in areas where I should be able continually follow a track; they were just not there anymore.
So the date was marked. I sprinkled some corn, topped with a little oatmeal and glitter for bait. Yes glitter. I can’t quite explain it but a couple of years ago I found out the oatmeal and glitter was very successful in tempting this beast of deer. It seems my daughter had left some glitter near my Black Magic and the two were mixed together. The next day 50 pounds of corn, 5 pounds of oatmeal, and the glitter were gone except for a few patches here and there along the tracks of where the deer had walked.
Not knowing exactly what time he would come by I was in the stand early. Just in case he was nocturnal, my early consisted of 3:30 am. The cold would have been unforgiving if not for the fleece and wool camo suit that I was given last Christmas. I waited, and occasionally napped. Nothing. I had convinced my wife I needed to stay in the stand for the entirety and she conceded after much debate and my promise of a special Christmas gift for her.
Breakfast consisted of Jack Link Tender Bites. Lunch was the same. In between I had a couple of packs of Toastchee nabs. My Mountain Dews in my backpack remained cold and refreshing. The morning passed to noon and noon passed to afternoon. Other than a herd of elephants, well, make that a squirrel (you hunters know what I mean), the day was uneventful. I remained determined.
The sun was setting behind the trees and a brisk breeze complicated the cold. My shooting time was over. I still wanted to get a gaze of my nemesis and considering my cell phone had long lost all battery power I decided to continue sitting. If you want to know what the cell phone battery had to do with my decision it meant my wife could not call and ask where I was. I had an excuse.
Much later than I should have been in the stand I noticed the deer I was after coming in from the left. And seven others in a herd as well. Our eyes met. He seemed to wink at me. I walked up to him and grabbed him by the antlers. And stared. And appreciated this magnificent creature. He shook his head a couple of times and the group galloped forward and a chubby fellow tossed a package to me. He said I would need it later as he and the deer took flight. It was a present with my wife’s name on it.
Posted by Bill Howard at 7:00 AM 1 comment:

Bad weather is usually not an outdoorsman’s friend. Extreme cold, high winds and heavy precipitation either in the form of rain, sleet or snow just makes for a miserable experience with little chance of success to boot.
This very reason is why I grew up disliking, no the proper word is actually hating, duck season. For whatever reason, it was the only time ducks would actually fly during shooting light. My dad would drag me out to the swamps or impoundments well before the break of dawn where we would throw out plastic decoys in frigid waters and hope for something to fly by.
Now I was a fairly decent shot regarding dove hunting, but ducks were a different story. Ducks provided a very small window of opportunity to get a shot off. With dove, I could watch them fly in for several minutes, point the muzzle and swing the shotgun through the bird while pulling the trigger and watch the bird fold up and fall. Ducks, especially in the swamps, required an instantaneous ‘snap’ style shot. And with inexperience combined with the pure speed of the waterfowl’s flight, I often ended up empty handed.
Dad on the other hand, well he had no problem. One of the best wingshooters I have ever seen, he could put a bird down with ease. After many, many years of watching how he shoots, I figured out how he was successful. He always kept a watchful eye out for the skies. He also knew his limits. Birds over the treetops were a no shot situation. If a bird snuck in on him and he did not get a chance to get the barrel up in position cleanly, he would hold off the shot as well. When he did shoot, he always followed through the shot and he never shot more than twice unless he had downed one bird and was trying to get a second and missed a shot. That was rare though. Not the part about downing one bird and going for a second but the missed shot part. He figured if he had to shoot a third time the bird was probably too far away.
As I became an adult I began to appreciate duck season more. While I am still not fond of the cold, I did have clothes that could keep me warm for longer periods of time. I still stretch my shots at times but my misses are fewer and further between now. I understand what to listen for and what to look for in the sky. I understand where the birds will come in to a decoy set. These tidbits are less knowledge and more wisdom. I learned from hunting, not from listening to others. It is not that I was not listening to more experienced hunters. It is just I did not understand fully.
I see that with others also. I have seen decoy sets laid out all wrong. Not because the hunter did not try to set them up correctly. In fact, they were likely trying to do exactly what they read in a book or magazine. But when they finally get it, when the light finally turns on, the success beams from hunter. Limits are taken and with fewer shells spent. The excitement from the new found wisdom carries over into future hunts.
And that bad weather is no longer a bad day.
Posted by Bill Howard at 7:00 AM 1 comment:

The day ended as it began; a sandy freshwater beach and a kayak resting half way between the water and earth. What was sandwiched between is where the story lies.

Still wanting to test the Old Town Predator kayak further and with another decent weekend weather-wise I decided to fish some waters I have never been to before. I started cyber-scouting during the middle of the week in search of a lake or river that had kayak or small craft access a long with promising fishing areas within a somewhat easy paddling distance.
One other feature I looked for was fishing tips for the cooler weather and water that late fall and early winter inevitably brings. At one point I was considering several holding lakes in the state for power plants that had warm water discharges. The idea seems very reasonable and when one ‘Facebook friend’ announced he was heading to Belews it nearly pushed me to follow. If it wasn’t for the fact I had been there before and I really wanted to test new water I probably would have.
I settled on one discharge lake that is known for the large bass that are prevalent throughout. But as I continued to read up on the techniques I realized I would be targeting fish that could be in pre-spawn, spawn, or even post-spawn phases. I wanted something more predictable.
As I filtered through the bodies of water I finally found one that hit my fancy. I found several articles and blog posts on not only winter fishing in the lake, but even some regarding winter fishing from kayaks and canoes. It is hard to get much more of a match. It also provided the potential for daylight catfishing and a species I had never caught before, the white catfish.

I drove the hour and a half to the lake and found my turn off with ease. As I progressed to the ramp I noticed several of the other boating accesses gated closed. Had I just traveled all this way to get to a ramp that would be closed as well? I cursed myself for the potential lack of insight. 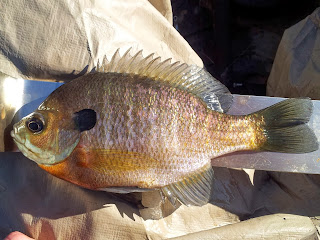 Luckily, the ramp I was searching for was open. There were not many vehicles parked in the large ramp access. In fact there were more vehicles with kayak and canoe racks than there were boat trailers. 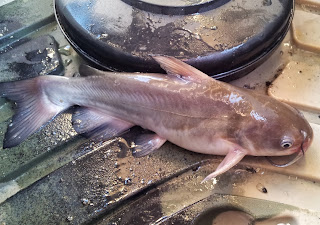 It only took a few minutes to unload and hit the water. I paddles around the point and headed to a bridge that I was targeting. There was already one power boat fishing the supports. As soon as I was near enough one of the anglers sprung backwards with a quick jerk of the rod. The first fish had been landed. I did not want to crowd them so I paddled to another spot about a half mile away. After an hour or so and no action whatsoever I paddled back towards the bridge. As I neared I also noticed two other kayakers fishing the structure as well.
All three boats welcomed me to join, with the power boat even remarking they were leaving a few fish for me. After snagging the bottom and cutting my line early on I pulled the cut line as tight as possible so as not to leave it when it gave a little. I continued to tug until it broke free and then noticed it start running to the side. Just a few seconds later and I was hand lining a rather large bluegill.
We fished and chatted for several hours. Fish were caught and released. And in between the beginning and the end, new friends were made. 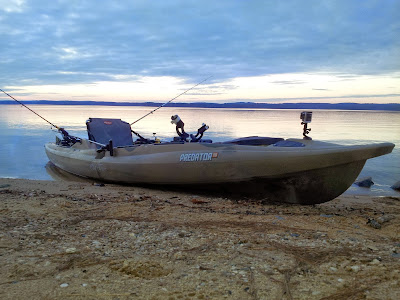