Don’t mess with Texas. That is a popular saying both in the Lone Star state and across the country. There is a good reason for it as evidenced by my recent whitetail hunt there.


After seeing more bucks in one morning’s sit than I may see in a season anywhere else, the promise was good for the first afternoon hunt of the two days. Texas was/is in the midst of a long dry spell and the days were sweltering. The activity is much different than where I am used to hunting. There, you do not have to anticipate a cold spell to increase movement as they are on the move always.


We met up with Matt ‘Chewy’ Linton, before the hunt and worked on setting up a new box stand for future hunters during the weekend. Chewy and I were friends on social media due to kayak angling, but had never met in person. You never know the stories of people until you are able to really get to know them, and Chewy was a pretty interesting person.


I knew he was instrumental in kayak angling in the state of Texas, especially towards the central and western part of the state. It didn’t surprise me he was a deer hunter since he was an outdoorsman. What I didn’t know was he was a former bassist for 3 Doors Down and Ember. As much as I thought of Chewy prior to meeting him, I was even more impressed afterwards.


After getting a bit or rest Bobby, Chewy and myself headed back out to the land. I was hunting the same area and had bow, arrows and camera in hand. Bobby and Chewy drove to a different section and were going to try to down some wild hogs if they presented themselves since gun season was not in for deer yet.


It only took about 30 minutes for me to spot a couple of does and fawns come out to my right. I fired a few shots, from the camera not the bow. I knew it was easy for deer to sneak out into the open without realizing it so I kept all my movements slow and smooth, and moved my eyes before moving my head.


That was a good decision and skill. To my front left I spotted a buck peaking from around the brush. I could not make out which buck it was or how big was the rack. The buck was not looking at me though. He was fixed on the four deer I had been taking photos of.


I was able to get a couple of photos of him before knowing this was a shooter. I quietly placed the camera behind me to avoid any disturbances. Just as I did, the buck began to walk away from the cover.


It was a nice eight pointer. Based on best calculations I figured he would net around 110 according to Pope and Young. Not enough to make book, but something I knew was a shooter based on what Bobby and I had went over and would have been my largest taken with a bow.


My issue was going to be getting set and drawing the bow without my movement being caught.


The buck continued forward moving from my left to right. As he did, the four deer to my right worked their way further and further away. Directly in front of me in the stand was an evergreen that should offer me enough cover to draw the bow as the deer passed on the other side. I just needed to hold long enough for him to get in the open.


It worked exactly as I envisioned it. I stood, turned my body and drew the 70 lbs without notice. I waited as he walked and approaching where the four deer stood prior. All I needed was that one pause in his stride.


Then it came. He stopped and stuck his head to the ground for a sniff of the landscape. Thirty two yards was what I estimated to be the distance based on previous scans with a rangefinder marking various rocks, plants and markings. Just behind the crease formed by the front leg with the thirty yard pin set firmly above where I thought the heart would be located. 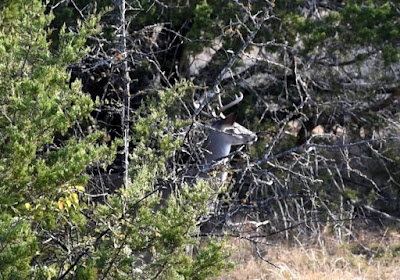 These moments are the ones that you become what you are. I cannot remember breathing in and then releasing half the air in my lungs. I cannot remember moving my forefinger from behind the trigger release to the front side. I cannot remember applying the slightest touch which in turn sent a 100 grain razor donned broadhead attached to a 28 inch arrow at over 300 feet per second. I do remember seeing the arrow’s fletching spinning towards the deer and disappearing as it passed through his reacting chest.


I waited there in the stand after carefully observing the direction he ran. I bowed my head giving thanks for the opportunity and praying for as quick and painless of a death as could be for my prey. A few minutes later I pulled my camera back up, zoomed in with the 300mm telescopic lens, and spotted my arrow a couple of yards from where the deer was standing moments prior. I was able to see the fletching of the arrow coated in red along with the ground nearby.


It was now time to start trailing blood during the second hunt.
Posted by Bill Howard at 7:00 AM