One of the things on my to-do list has long been to visit the elk herd in North Carolina. For a variety of reasons, I have never made my way into the Cataloochee Valley. I guess it is like a New Yorker never going over to the Statue of Liberty because they know it will always be there and never made it a priority. 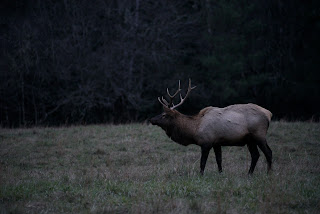 I finally made it a priority. I happened to be photographing a property not far from where a large portion of the herd tended to stay, so it only made sense.

A little history of the elk in North Carolina would be an appropriate lead in. Elk naturally inhabited the state up until the late 1700’s. At that point they were hunted excessively and habitat began to dwindle. One of North America’s great beast had disappeared in North Carolina and the Southeast.

The Great Smoky National Park reintroduced an elk population in 2001 with a release of 25 elk they gathered from the Land of the Lakes area of Kentucky. The next year North Carolina received another 27 elk from a herd located in Canada. 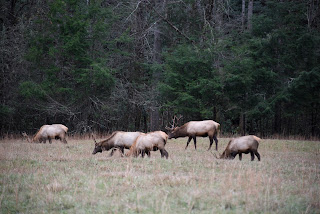 Kentucky led the way with elk restoration. In 1997, seven elk were released in Eastern Kentucky from a herd located in Kansas. Kentucky had a long term goal of stabilizing their herd at 7400 animals with releases of 200 each year for 9 years. Due to the elk population flourishing, the plan was altered. From 1997 through 2002 Kentucky brought in 1550 total animals. The program of restoring the population through bringing the animals in stopped in 2002. Now the estimated population is around 10000 elk and the ongoing program is funded by hunting license sales.

North Carolina’s herd did not fare as well. With the introduction of the 52 elk in through 2002, the herd only stands at approximately 145 animals today, nearly 15 years after the first animals were brought in.

While the national park considers the elk restoration a success, a few years ago some battles began about the sustainability of the herd. Once the success was declared the herd was allowed to be taken of the special concern status. The question then began as to whether the Wildlife Commission should allow hunting for the elk outside of the national park. 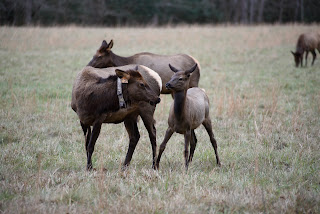 Amazingly, hunters were the ones that stood up. Many expressed concern with the barely larger birth to mortality rate of the established population as evidenced over the decade. A population that has succumbed to parasites and predators and doubled over a ten year period is hardly a population ready to go up against even more potential threats due to hunting.

And here we are at this point in time. A small moderate herd that nonetheless consists of an absolutely beautiful creature.

Elk are much larger than our familiar white-tailed deer. In fact, a first time hunter who takes a deer is usually surprised at the small stature of the animal. Elk on the other hand, are quite impressive. Some of the larger bull elks in the park approach half a ton. 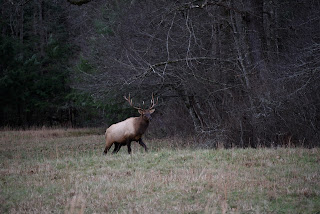 My biggest concern was locating the elk. I knew a large portion visited the Cataloochee Valley, but I was not sure if they would be like most in the wild in which a sighting may be happenstance.

As I took exit 20 off of I-40 just northeast of Waynesville and turned onto Cove Creek Road, my anticipation grew exponentially. Once I entered the park and meandered my way down the gravel and paved roads my anxiety ceased.

There they were. Massive bulls, a multitude of cow elk, and several yearlings adorned the meadows of the valley. I have seen many things across the country that inspired awe. This was added to that list. How could I have not visited something so amazing sooner?

It is hard to put into words that vision. So instead, let me suggest taking a weekend day to the Cataloochee Valley. Visit early in the morning and again in the evening. It is something you will not regret.
Posted by Bill Howard at 1:50 PM