If you were to ask passionate whitetail hunters across the country for locations to target their next whitetail, you would likely get answers such as Iowa, Ohio, Wisconsin, and Texas. They carry the reputation as trophy states with deer growing big antlers and big bodies.


So it was only natural for me to find a way to sneak in a couple of days bowhunting while on a photoshoot in Houston.


It was going to work out well. I had a two day period between jobs in Houston and St. Louis and I had an old friend who lived and owned some land outside of Austin. I briefly saw him on a previous trip when I was in Houston and Dallas, and he tried his best to convince me that I needed to see what he had hidden in the Texas hills.


I arrived Friday night and we caught up on old times until the wee hours of the morning. We also went over trail camera shots over the past few months. I could tell he had a good handle on what was there and he had put the time in to make these deer grow to their peaks.


It is not always easy to do something like that. We experience troubles with quality deer management programs in the Carolinas for a variety of reasons. One, we do not always have a large enough parcel of land to contain the deer year round. Deer tend to stay within a few miles of where they were born, and only during the rut do the males extend the range. Even then, it is not as much as you would think. 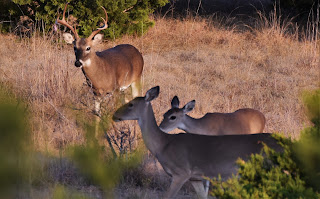 We also have an issue regarding the deer not getting old enough. A nice eight point deer around here may only be a year and half old, but we shoot knowing that the deer will likely not make it another season.


Why? Well other hunters on adjacent lands is a factor. Another factor is we have roads everywhere, and there are a lot of vehicle/deer collisions. As beautiful as our state is, it just does not possess the ability currently to allow deer to fully mature.


The deer in Texas is a completely different story. Bobby, my friend, poured over picture after picture of Wideboy, Hammy, and Megatron to name a few. Bobby actually had nearly all of them named. He even had names for the does on the land such as Methuselah, and elderly doe with a sagging back, pronounced hip bones and nothing but nubs for teeth. She had been having two fawns each year until last year. Now she fights other does for their fawns and raises them.


He pointed out deer that were four or five years old with monster racks, but he wanted to keep them around to pass on their monster genetics. He has others that were two years old with antler bases nearly as thick as your wrist. “Last year he was a big six. Next year he will be a ten with brow tines ten inches long, just like his daddy was.” Yes, Bobby knew what was on his land.


I would hunt Saturday morning. I was not trophy hunting per se, although there are several deer that would currently make Boone and Crockett standards, and many more that would make it into Pope and Young (the bowhunter record book). I was going for my biggest buck, which would not take a lot since I have mainly culled does over my hunting years.


I watched a beautiful sliver of a moon drop just as the sun began to rise while sitting on the platform stand. Texas hill country is much different than the still hunts here. I was over the trees, not hidden amongst them. I knew the challenge would be to find the deer to take, draw the bow, and release without being noticed.


During the sunrise I spotted two jack rabbits as big as Siberian Husky to my left. It was not long before the ‘unicorn’ buck also made his way in. This was a buck on the hit list. He had one side of his antlers that looked fine. The other side was just a single branch mess. I knew if I had the opportunity I needed to take this deer as I would still be able to hunt longer.


The shot did not present itself though. Not because the deer was not in range or in the clear though. The shot could not be made because in just a matter of a few more seconds and there were another five bucks roaming in front. In all, I would estimate I saw over 20 different bucks and another 10 does and fawn. And this was just on the first morning of the hunt.
Posted by Bill Howard at 11:34 AM