As a hunter who has traveled out of state for several ‘dream’ hunts, it is important to keep your gear safe, intact, and exactly the same as when you packed it.  Nothing more so than the equipment you rely upon to bring down the game you are pursuing.  In my younger days as a preteen, I would marvel at my grandfather’s expeditions to Alaska, Canada, and Africa in his search for some of the most dangerous and fascinating creatures that you only see in books or occasionally at the zoo.  Each time he loaded his bags at the airport he would have a hard metallic gun case carrying two rifles.
I was helping him sight his rifles one day before he was heading on a trip to Africa and I asked, “Papa, why do you carry two guns?”
“In case one doesn’t work.  It could get damaged in the trip or simply malfunction.  I don’t want to cancel my hunt just because one rifle is broken” 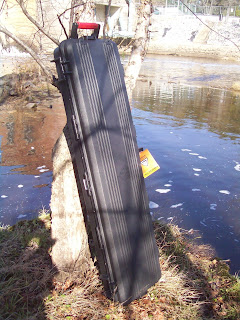 I recently was afforded the opportunity to test and review the AW Double Gun Case from Plano and the Outdoor Blogger Network.  First, I have a Plano bow case which Santa brought to me several years ago for Christmas.  This was an airport safe case as I was heading to Arizona for a mountain lion hunt that March and needed something to pack the bow in for the trip.  While this is not a review on the bow case, it did well and survived the trip, but I could tell the baggage handlers had their fun in tossing, tumbling, and stacking it.
As for the Plano AW Double Gun Case, after opening the box the initial thought was “This thing is heavy!”  In fact, over 20 pounds heavy WITHOUT firearms!  It does have 2 rollers and a end handle (for use when rolling) and a side handle (for carrying).  The handles are more than sturdy enough to carry the load.  They are also comfortable to the hand.
On the long end of the case are 4 double action latches, two of which have keyed locks.  There are also two padlock holes located on either side of the long end.  The keyed locks would probably suffice for airline and government regulations, but I would likely add a Master lock to one of the holes if traveling by air.
On each end is another double action latch.  The latches are very strong and sturdy as well, however the one located where the handle is on the end is tough to get to.  I found it manageable but still aggravating that by lifting the handle then popping the latch loose was the easiest method.
Inside, the case is lined with two plush foam pads.  A third pad rests between the two.  The one pad is shown as being able to be cut to form the outline of our firearm.  Most I’ve seen in this manner were already partitioned into squares making it easy to remove the part of the pad where the rifle or shotgun would be placed, but this one solid pad with no pre-cuts.
The case has a secure weather tite seal around the perimeter of the case when closed and latched.  This protects against water and dust/dirt.  Note: NOT WATERPROOF, but splash proof...yes.
The test came next.  When traveling, I recommend packing socks, t-shirts, underwear and the likes inside gun and bow cases.  This solidifies the case, helps prevent unwanted movement which minimizes the chance a scope will get bumped out of line, and protects the firearm better.  With this case, I’m not sure this extra precaution is needed.  It’s the strongest Plano case I have ever seen.  I stood on the side of the case and the case barely moved.  This may not mean much without the knowledge that I weigh 225 lbs and I was putting all the pressure down on my heels, increasing the lbs per square inch.
There are other cases that are known for the protective traits that run over $200 for a similar case to this one.  Plano’s AW Double Gun Case can be purchased for under $150. 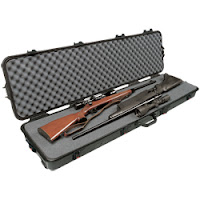 Overall, the Plano AW Double Gun Case has outperformed my expectations and will surpass yours as well.  Plano succeeds in not only protecting your highly valued firearms, it protects your once in a lifetime hunting expedition knowing your firearms will be safe and secure while resting inside.


Bill Howard writes a weekly outdoors column for the Wilson Times and Yancey County News and the bowhunting blog site GiveEmTheShaft.com. He is a Hunter Education and International Bowhunter Education instructor, lifetime member of the North Carolina Bowhunters Association, Bowhunter Certification Referral Service Chairman, member and official measurer of Pope and Young, and a regular contributor to North Carolina Bowhunter Magazine.
Posted by Bill Howard at 12:16 AM