Jetski Fishing off the Atlantic Coast

I like trying normal things a little differently. For instance, several years ago I bowhunted for mountain lion from horseback in the high desert of Arizona. Obviously, this is not the normal means of hunting a lion. I will routinely camp out in a tent beside a field I intend to hunt deer to prevent alerting any that may be in the field by driving onto the property. Earlier this year I took to the Neuse River fishing a twenty-two mile stretch by paddleboard over one weekend. I have also bowfished for flounder rather than using a rod and reel or a gig, and in the process took the North Carolina state bowfishing record.


After interviewing Brian Lockwood, otherwise known as Jetski Brian, a couple of months ago, I knew I had to try jetski fishing off the coast. Since that time I have been working on a ski and fishing setup so I could experience it. I wanted a setup that would not turn the jetski into a pure fishing machine. I have three kids and I knew if I altered the ski that much then they would not have a chance to just have fun on it.


The challenge was conquered by mounting rod holders and building a camera mount onto a 120 quart cooler. Instead of using a built on cooler rack, I installed feet on the cooler to lift it up off the back of the jetski and then rigged it so it could be attached to the ski using the eyelets already on the ski. 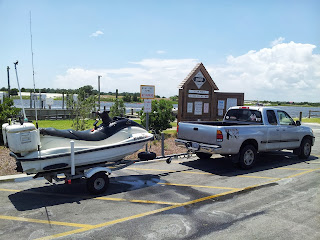 After a few fresh water lake test runs, I knew the setup was close to what I envisioned.


I made one inshore test run off of Emerald Isle. Running about 40 miles in one day and catching a few croakers and spots, I realized a few changes I needed to make if I was going to take it out in the ocean. Over the next week, I was able to make the changes and prepare for possibly my last coastal trip of this year.


I targeted an artificial reef off of Wrightsville Beach. The fishing was reported to be good and the weekend weather report showed expected favorable conditions.


I checked all the extra safety precautions I added to the ski; a newly installed bilge pump, a fish finder with gps tracking capability, two extra batteries for my cell phone and an offline map application to use with the phone’s gps even if cell service was not available, a vhf marine radio with one button distress signal that would send gps coordinates in the mayday call, and second battery for the jetski itself, just in case the main battery failed.

My wife was beyond nervous about my trip and I printed up a map of the reef I would be fishing to help ease her mind.

As for me, this was going to be a challenge, but not something I feared. I have always been comfortable with water. I learned to scuba when I was fifteen and have been known to swim several hundred yards out in the ocean to chase dolphins. The main challenge was going to be finding the reef. Satellite imagery works great for hunting, as you can spot different areas fairly easy. Satellite imagery of the ocean only shows you ocean. This trip would rely heavily on using gps equipment by instruments only. It kind of reminds me of a pilot having to rely on his gauges during night flights.


Second, I was going to target some species I have never fished before.


All so I could experience something that most will never attempt to try.
* * * * *
The morning started early. 3:30am early in fact. The coast is a long ride from the house but the promise was too great to not get there early. Reports on the area showed Spanish mackerel fishing was going well in the morning and late afternoon hours.
The track I intended on taking would be through the Masonboro Inlet and then head to the bouy AR-370, known as the Meares-Harriss Reef. Once putting in at the wildlife boat ramp just over the bridge at Wrightsville Beach I was able to park quickly and head out. The Intracoastal Waterway was nearly like glass and very few boats were out. In fact, there were many more people paddleboarding in the area during the early hours than there were boats heading out. Wrightsville Beach has become somewhat of a paddleboarder’s Mecca and hosts one of the largest paddleboard races in the world bringing in competitors from as far away as Australia and Hawaii.
After exiting the no wake zones I throttled on up to 30 mph. And then the unexpected happened. The jetski chugged and shut down. I restarted it and it fired up quickly. Again, as I throttled it up it shut down. Cursing to myself I realized a three mile plus trip out into the ocean was not the best thing to do with a jetski acting up. I turned to head back to the ramp.
Then I decided to check one last thing just as I turned back on the ICW from the inlet. Sure enough, I was able to turn the fuel switch further than the marks indicating the tank was on. The switch was loose, so even the marks were aligned, the switch had twisted meaning I only had the fuel on partially. 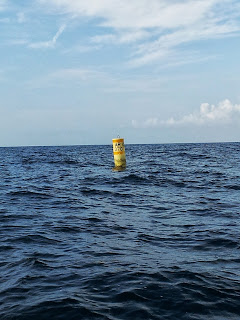 After a few checks, I once again gained confidence in my vessel and took toward the inlet once more. The jetties guarding the inlet presented much rougher water but nothing that presented concern. I stopped briefly to put a leader with a Gotcha plug attached to a planer on the rod. I casted out just a few yards and allowed the setup to sink and restarted the ski. As I left the inlet I drove within a couple dozen yards of the jetty wall. The water was around 50 feet deep and 78 degrees. I tried to monitor the setup as I exited the inlet but didn’t notice much. I continued out from the inlet a few hundred yards and stopped again to reel in my trolling rig. Something did not feel quite right.
That was because I hooked my first Spanish mackerel, an eight inch specimen. Not big enough to keep, but my first none the less.
Anxious to try my hand at both finding the reef and experiencing the near shore fishing, I decided to go ahead and head out to sea. 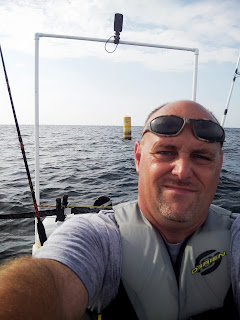 My preparation proved efficient and I was able to locate the reef rather easily. There were a few other boats fishing nearby also, and I knew I was getting some strange looks. I set up my rods for some reef fishing and dropped the baits.
The next several hours consisted of bringing in fish constantly and consistently. Ten seconds on the bottom seemed like a break as the fish attacked the bait as quickly as I could put it in. 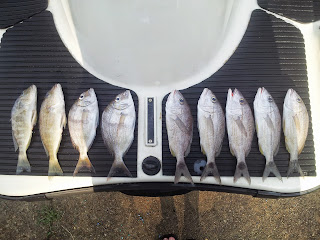 In the course of the day, I witnessed a sailboat race that painted the ocean’s surface and toward the end waves with eight foot swells. The jetski performed flawlessly after the fuel switch correction and acted as an enlarged bobber through the rougher seas.

And in the end, it proved a viable alternative for some excellent fishing.