Dove hunting was by far my favorite hunt growing up.  The weather was usually nice with a touch on the hot side.  Well, it was actually very, very hot, but as a pre-teen and teen and a baseball player, 90 degrees seemed normal.


Duck hunting on the other hand, just wasn’t my cup of tea.  Don’t get me wrong, I liked shooting.  But duck hunting was alien to the bird hunting I was accustomed to.  It was cold for one thing.  Bitter cold.  The wind was usually howling and for some reason that God can only explain to me, if it rained, it meant the hunt would be even better.  Really?  Cold, wet, and windy meant this would be a good hunt?


But this was not all!  My dad and I would spend several hours getting the boat ready, packing the decoys, getting our clothes situated then drive several more hours so that we could get in a boat in this terrible weather, drive the boat in dark for another 30 minutes, throw out several dozen plastic birds, and then sit in a blind to wait for the sun to come up.  And yes, I hated the ‘early’ part of the hunt also.  Dove season would come in at noon.  Ducks, they flew thirty minutes before sunrise.  Curse those ducks!


I think I was around thirteen when I shot my first duck.  Nothing special.  Not a magnificent shot at all.  In fact, the hen ruddy duck just kind of flew in and landed.  We didn’t call her in.  I don’t think we noticed her until we saw and heard the splash of her landing.  We scared her up so I could get the shot.  But it was my first duck.


Over the years, especially the last ten or so, I enjoy duck hunting much more.  The variety of species intrigues me and I am like a kid in the zoo when I spot one that I don’t usually see.  In all likelihood though, I think my taste for hunting ducks lies mostly on lifestyle.  Not the lifestyle of living large, or even living lower.  More in the lines of my day is not taken completely away by heading out for ducks.  My wife is less frustrated than if I sit in a stand all day and show up an hour after dark.  I still do not like getting up early, but it is tolerable and I have more discipline as an adult to force myself to get out of bed.


My oldest son’s first experience with hunting waterfowl had the makings of both a miserable hunt and a first class experience.  We hunted swans near Lake Phelps in the northeastern part of the state.  It was hard to find camo for his small frame, but we pieced some things together.  We also had absolutely no luck in finding BB steel shot for the 20 gauge side by side he would use.  He shot 4 shot instead.  The #4s are great for ducks such as woodies, but I was warned that the swan was so big he would not be able to bring one down.  Still, we had to use what was available. 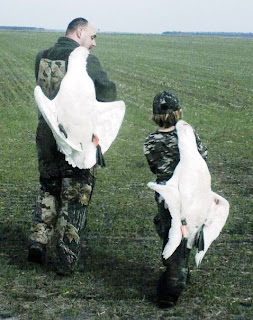 The party hunted from a ditch in a field that must have been more than 10,000 acres and the guide was calling only by mouth with his hands cupped over his lips.  There were about a dozen of us hunters.  Turner was too short to reach from one side of the ditch to the other, so he settled his feet in the bottom and leaned against one side.  Within seconds his boots were completely underwater and he whispered to me that they were soaked.  I kicked with the back of my heel a small shelf into the side of the ditch and he dug his heels in the shelf to stay out of the water.  I could only sympathize for him about how the hunt was starting.


The first time he used the Ithaca 20 gauge was just a few months before on opening day of dove season.  He didn’t even shoot a box of shells, but did bring down a few birds.  I saw he was trigger shy.  He was still learning.  When to shoot, when not to shoot, would someone be upset if he missed, would others laugh; all those questions were certainly flowing through his mind.


This day was not much different.  I shot five times that day to get my first swan.  The swan I shot was actually a follow up shot after Turner’s first shot.  Turner had hit him, but he didn’t go down.  Turner took one more shot that day, folding a young swan nearly 70 yards away.  The small shot with a small shotgun that was fired by a small 9 year old was no small feat.

﻿
I look back on this day after reading an email from David Tomlin.  David shared with me how his hunts changed after having a child.  Then he emphasized ‘for the better.’  I realize how blessed I am to have been with my son on the swan hunt, the dove hunt, and the many other hunts we have done since.  I realize how blessed I am as I teach my daughter the same skills.  I anticipate the opportunity to teach my youngest son and experience everything again for the first time through his eyes.  And as I think about these events, I realize how blessed my father and grandfather were to experience the same with me as I encountered my ‘firsts.’
Definitely for the better.