Sometimes a hunter will seek a trophy that teases.  It will remain elusive, while leaving just enough clues to entice the hunter to continue the pursuit.  I call this ‘chasing ghosts.’  Not because it is a ghost mind you, but because I might as well be looking for ghosts, as the chess match between the two of us edges forward to either a checkmate, or a draw.
I have one of those games going on now.  A large buck that has kept a regular pattern has proven to be elusive.  I have found when he hits the stand site, and I have remained determined and patient in the quest.  Even if it means going to the stand at 3:30am in order to beat him to the area, I do.  I sit, and I wait. 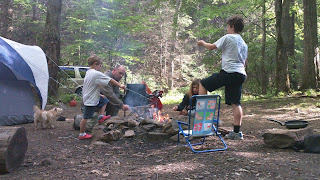 Not everything involving the outdoors is hunting or fishing though.  Even when participating in those two activities, the communion with nature is the real reward.  Sometimes I try desperately to involve as many family members as possible.  But there is just so much room in a stand or boat, so I have to think of interesting expeditions that can be shared between us all.  Last year I convinced my wife that a camping trip in Pisgah National Forest with the kids and dogs would be fun.  Luckily it was.
We also made a trip to the zoo last October.  My family, with my mother, met with my cousins and my aunts and toured the exhibits.  Everyone enjoyed the trip, as well as seeing each other.  We reminisced about our trips to the zoo with my grandparents when we were kids. 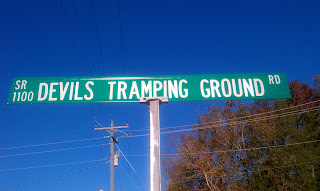 When we left though, I had a surprise up my sleeve.  It was the weekend before Halloween, and my family enjoys the paranormal televisions shows.  So I figured I would take a detour and visit a site I have heard about since my pre-teen years, but was never able to go to. 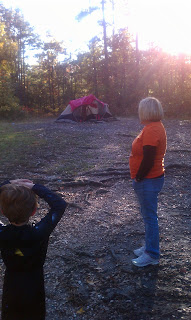 We headed down a back road out in the middle of nowhere.  In the road we spotted a large cross painted in white.  I knew we were near.  I located a small path and pulled over to the side of the road.  We had found the Devil’s Tramping Ground.  What we found there made me uncomfortable so we didn’t hang around long.  Inside the mythical circle of barren ground was a small fire.  Just outside of it was what used to be a very nice and expensive tent, ripped to shreds.  I never found out what happened; I didn’t care to.
This year, I decided to knock off another of my bucket list adventures in North Carolina.  We ditched the kids and my wife and I found a small cabin (REALLY SMALL!) to stay in over the weekend.  The quest: The Brown’s Mountain Lights.
The legend goes that there was a war between neighboring Indian tribes many hundreds of years ago.  After the slaughter and bloodshed, the widowed took torches through the valley near Linville and up the Brown’s Mountain in search of their perished loved ones.
The United States Geological Society even tried to find explanations for the lights.  The common belief was they were reflections from a train that would travel nearby.  During the survey, a great storm came through and washed the train tracks out, yet, the lights again appeared.
Other common theories such as swamp gases were also ruled out, in large part because there is no swamp. 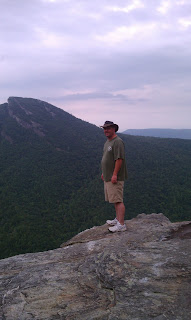 My goal was to just see the lights.  How could there be no explanation if they appear so regularly?  So on our second evening, we drove a long and winding path past Linville Falls and headed to the Wisemans View.  The best time to see the lights is between September and November according to reports.  Talking to locals, they can be seen just about any time, although shortly after a storm and in the fall they are more prevalent.
We arrived just before dusk.  There was a slight chill in the air.  Many people had gathered at the view, and we went beyond a fenced area to sit atop a flat boulder ledge near the main overlook.  At first, the people that were near us would shout and point “there’s one!”  I looked at my wife and thought it may truly be a myth as we didn’t see anything.
Then, I spotted a red light, dancing down the mountainside.  Then another a few hundred yards away.  Then another.
As the night embraced the area, we saw more and more.  Many of the lights seemed to flicker in response to other lights maybe a half of a mile to a mile away.  One greenish hued light worked its way up from the river all the way to the side of the cliff where we were.
A rational man would say the light was from someone below.  Usually I am rational.  However, when the light would appear below the tree canopy below and then float above the trees in other spots, rational is no longer a state of mind.
Is it ghosts of long ago?  Is it reflections?  Is it swamp gases or somebody down below in the valley trying to get their own closer look or even fool all the viewers above?
My answer is I just do not know.  I intend on pursuing the answer again.  The intrigue grips me.  But for now, I have my other ghost to chase.
Note:  Brown Mountain Lights can be seen about 4 miles from Linville Falls, NC.  The lights have supposedly been seen since the 1600’s.
The Devils Tramping Ground is located near Bennett, NC.  The ground is reported to be sterile of vegetation and is located about 100 yards from the roadside.
Posted by Bill Howard at 7:00 AM