A couple of years ago, Rudy began a social experiment in which he documented real hunters in a series that hunting shows do not capture.  I just finished watching #deertour in which Rudy covered the real life hunting experiences of real life people, 20 in all, and the effects and influences of social media as it relates to the outdoors.  Rudy traveled through 12 states and over 5000 miles to reveal a bit of each of the hunters lives.


Social media, whether we like it or not, has woven itself into the fabric of our daily existence.  Through outlets such as facebook, twitter (hence the #deertour in the title), pinterest, blogs, or even online forums, people have been able to reach out and share their interests and hobbies like never before.  Through the hunting season last year, I followed many of the ups and downs of many of the people documented on the DVD.  I saw the excitement as a tweet came over about a deer coming to the stand.  I also witnessed the downs that occurred along the way. 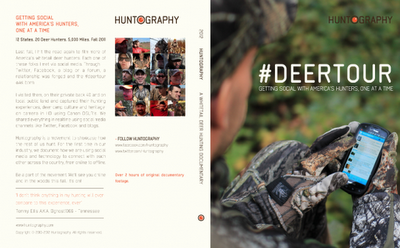 In other words, while watching the DVD, I was able to reminisce about the experiences they were having because I had an inside seat as it occurred last fall while following on twitter and facebook.


Many of the hunters portrayed in the video I had come to know, not by face, but by avatar.  It made for an interesting relationship.  I have shared emails with many of them, and have worked in collaboration with many of them as well over the last 6 months.  But it was remarkable that social media could actually tie the feelings to the moment like it did.


For instance, Lisa and Mike, both living near Charlotte at the time, were representing the North Carolina stop of the #deertour.  Of course, that made them like the home team.  I remember vividly the day Rudy rolled in and the group heading to the woods.  In fact, I tweeted to them that day to represent NC well.  Lisa did as she brought down a buck that day.  Rudy tweeted a picture over during the hunt and the video made it seem all the more like I was there.


I witnessed Lisa’s excitement and tears as she realized she had connected.  I also witnessed the next day when Lisa and Mike’s beloved dog, their companion, passed.  I witnessed it from a completely different location, but I was there.


I remember cheering on Will in Virginia as he hunted his father’s land.  Their homestead.  I had seen a satellite image of exactly where they would hunt in the woods surrounded by agriculture.


I remember Rob in Maryland, the king of the deer hunters, taking his 9th deer of the season.  I met both Rob and Will in person at the Dixie Deer Classic this year in Raleigh and found out Rob had taken over 40.  Yep, a deer killing machine.  And all were legal.


I followed Tommy in Tennessee as he took after a deer on opening day of muzzle loader season.  He shot twice.  I read about it.  Then I was able to feel it even more after watching it.


I have followed Ryan in Ohio on his blog and his tweets.  A new breed bowhunting athlete that can run a half marathon in the rocky Midwest in pursuit of elk and still make the vital shot.  While I learned about Ryan the person through the world of the web, the video showed me the mannerisms of the person.


I watched the passion of Scott and Michelle from Wisconsin for both hunting and each other.  Caring and compassionate, their love for the outdoors is only outdone by their feelings for one another.


I was able to get to know David from Ohio through his tweets and facebook posts.  Yet another caring man, humble in all he does, with a goal of sharing what he has learned from the outdoors.  No, not sharing the secret to bring the big buck in, but the secret of what the outdoors means.  David put it best when he spoke of how he took his daughter hunting with him one time.  He asked her why she didn’t want to shoot anything.  Her response was she just wanted to spend time with her dad.  David expressed how that touched him better than any Oscar Award winning actor could ever do.


Throughout all of these moments, I can remember sitting in the stand myself.  I remember what I saw and when I saw it.  I remember my daughter watching a doe and fawn coming up behind me as I released an arrow at a doe twenty yards in front of her.  I remember my nephew’s excitement one morning as we watched a deer feed as the sun crested the horizon.  He texted me from the stand wanting to make sure I saw it.  We were 10 yards apart in separate stands.


Thanks Rudy for sharing the lives of these real people doing real hunts.  For now, I will leave the computer as my oldest son wants me to share a few minutes with him.  David from Ohio, thanks for sharing and teaching what is real.


You can see the trailer and purchase the DVD at Huntography.com.
Posted by Bill Howard at 7:00 AM