Mark Zuckerberg has been having some issues on his Facebook platform recently. It seems fake news and posts have reached a pinnacle and those online are starting to realize the damage they can cause.
Politically, it can sway an election with those on one side proudly standing by deceitful news, posts or memes, as long as they strengthen their own beliefs. You do know, perception is greater than reality.
However, it does not just effect political events.
Once upon a time, stories could take lives of their own, and the stories would change from one teller to the next. There was a game we played in school to show how this happens in which one person would whisper to the next a couple of sentences, and after passing from one person to the next for thirty or so people, the last person and the first person would share what they knew the sentences to be.
As might or might not be expected, the resulting statements would be completely different.
Now, the stories start out as fabrications but just like the popular insurance commercial said, it’s on the internet, so it must be true.
Lately, an old story has started making its rounds once again showing this. A trail camera photo of a large black cat walking by in the woods has got people astonished at what might be nearby. The accompanying story with the photo is always referring to a friend who has a trail camera out on their land captured the attached photo of a black panther on their land. The land location has varied but usually is somewhere near where the majority of the sharer’s friends live. 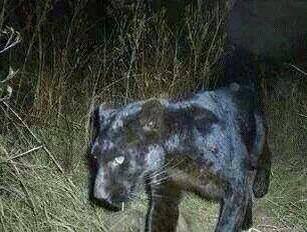 This particular run has included Plymouth, North Carolina and Roan Mountain, Tennessee amongst others. The story always mentions that it is proof that the big cats are in the areas even though the various state and wildlife officials deny it.
But, there are facts in the way of the story. First, panthers, or mountain lions, panteras, or cougars, which are all the same species of big cat, are not very prominent in the southeast. Except for a very small population in Florida, there are no known groups in the Southeast, or east of the Mississippi in all truthfulness.
Don’t get me wrong. There are mountain lions that do pop up on occasion from South Carolina to New England. The males, or Toms as they are called, tend to travel. Dominant Toms may inhabit a 100 square mile area, and any other males, including cubs that are just born, are hunting by the alpha male in his territory.
Therefore, younger and weaker male lions will travel to get away to other areas and establish their own territory. Sometimes, these cats get pushed very far away from where they were born. Just like a housecat that stays outside may travel several miles at night and the pet owner never knowing it, these bigger cats go much further, and they do not worry about returning to their original home since their food isn’t waiting in a bowl under the carport.
The other issue with this particular urban myth, or even suburban myth as it might really be called, is the cougar cannot be black. And again, by cougar, it includes any of the other popular names such as mountain lion, panther, pantera, and painter.
There are two cats that are known to be able to have the gene that causes it to be black. The leopard and the jaguar. The leopard is in Africa, so we can immediately rule this cat out as the culprit. The jaguar is primarily in central America. There are small populations that have established territories in Mexico, and occasionally one may cross over into Arizona or New Mexico, as they do not understand international boundaries.
But for one to make it from the southwest deserts to the mid-Atlantic mountains, piedmont, or coastal areas is unlikely. Even more unlikely is for the jaguar to make it that far to have the rare gene that causes it to be solid black.
So even while the Carolina Panthers may sport a black cat as its mascot, it happens to be the only one here as the photo and story of a black panther crouching through the woods by a trail camera is an impossibility.
Posted by Bill Howard at 7:11 AM