The weekend was shaping up to be very interesting.  After having a week of 80 degree weather, a cold front stormed its way in on Friday and would drop the highs to the low to mid 60’s Saturday and Sunday.  At stake was a 22 mile overnight paddleboard float down the Neuse River from Waynesborough State Park to Cliffs of the Neuse State Park.
Waynesborough State Park used to be run by the Cliffs of the Neuse State Park and is now owned and operated by the Old Waynesborough Commission.  The park consists of 130 acres of land that includes buildings that resemble the old community with a visitor’s center, general store and others of the period.
After a brief visit, it was off to do business just down the road at the boat ramp.  As we unloaded the paddleboard and equipment I would be using for the weekend, a large group came up with canoes and kayaks.  It was obvious the river would not be lonely. 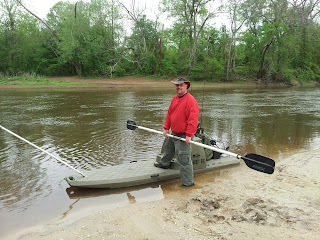 The river began with a few twists and hairpin turns and was flowing at a decent pace.  Once I hit a straight shot in the river, I began casting the line to see if I might entice a striper to bite.  Basically the float consisted of paddling, then casting, then paddling, then casting.  The water had very low visibility due to the muddy run-off from the rain the day before.  About two miles downriver, I had my first encounter with a fisherman coming up towards the ramp I had launched from.  He stopped and made a comment about the paddleboard and shared his fishing information with me.  Another boat had just pulled in the first rock fish he had seen near the Seymour Johnson AFB runway.  “Cast upstream from the pylons,” was his more precise instructions.

Another hour of paddling and I started seeing the signs warning of the Air Force Installation.  The trees cleared to a large open area.  This was the airport landing.  Ahead I could see the pylons.  I secured the paddle and grabbed the rod and reel.  I could go on about each individual cast and what I was using as well as the technique, but it really doesn’t matter.  The end result was no fish and no bites.  The river was flowing fast and it didn’t take long to pass through the area without a means to anchor using the paddleboard. 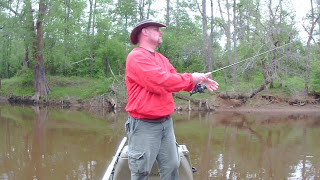 A long straight away followed by a few bends in the river and I came to an opened turn with a sandbar on the inside of the turn.  I paddled up and took advantage of one of the few shorelines that allow for beaching to stretch, and to grab another soda.  I wanted to go a little further before breaking for a meal so after making a few casts from the shore I pushed off and set down the river once again.
A few more bends in the river and another long straight lay in front of me before I found another suitable place to make landfall.  With the limited landings, I decided to go ahead and get a bite to eat.  I went ahead and finished off my soda I had opened as I ate a candy bar and some turkey sausage.  I then looked for a spot hidden from the river to excuse myself when I came up beside a log about 30 yards off shore.  I don’t scare easy, but there was enough of a vision in the corner of my eye to give me a good startle before I could process the situation.  Laying beside the log, nearly camouflaged perfectly with the log, grass, leaves, and ground were two banded water snakes.  The largest was easily four feet long and as thick at my forearm.  I grabbed the camera and shot some videos and stills as they lay peacefully together.  The cool weather likely kept them inactive as well.
I reloaded the paddleboard and set off once again, knowing the next stop would need to be a campsite.
I found one place that would have been ideal another hour down the river.  Beautiful green grass on a flat landscape, easy access to landing the paddleboard, and a clear spot to make a fire without danger of it spreading.  Unfortunately, it was posted.  Instead, I just admired the work done to keep it clear and clean and continued ahead.  Now it was close to 7:30pm and the sun was coming close to dropping below the canopy of treetops that lined the river’s edge.
Finally, in another bend of the river I spotted a location.  The landing area was not ideal but it was flat.  This meant the board would run ashore just fine.   It also meant that I would likely have to step into deep mud.
It was more than that.  It was deep, sucking mud.  It nearly crested the top of my boot when I stepped off and then it worked like quicksand, engulfing me with each step.  I grabbed the front of the board and lugged it upon shore as far as the mud would allow.  I grabbed my dry bag, set up camp and got out of my damp and muddy clothes.  A quick can of spaghetti heated by a solo burner finished off supper, a text to my wife that I had set up camp and was going to sleep, and I was out.
The night was cold, colder than expected actually, and it seemed never ending.  I refused to turn on my cell to check the time for one to save the battery, and for another the fear that I would see it was only 10:30pm.  While I was constantly waking up during the night, only once did something from outside wake me.  Again, I have no idea what time it was, but the sounds I heard resembled the holler from the Sasquatch caller on the television show ‘Finding Bigfoot.’  And it was loud.  But it was not scary.  Just loud enough to wake me from probably the only deep sleep I had during the night.
The next day, I finished off the quest, paddling ferociously with the flow of the river but against a strong wind.  I once spotted some shad in one spot and decided to make a few casts only to notice I was now being blown backwards against the river flow.  I put up the rod and grabbed the paddle once again. 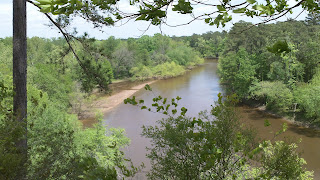 The final destination was the Cliffs of the Neuse.  For a span of 600 yards cliffs as high as 100 feet lined the river.  You could see the strata from different eras in the cliff banks.  Created by a prehistoric fault line, the area was once under the ocean.  Many sea fossils including whale bones had been excavated in the area.  It was also the resting place for the ironclad vessel CSS Neuse.
My wife and I walked around briefly after she picked me up and we took some pictures from above and also visited the recently build visitors center.  Outside on the sidewalk was a painting of the Neuse as it stretched from the Pamlico Sound up to Raleigh with markers along the way representing different towns, cities, and places of interest.
22 miles by paddleboard, no fish, an encounter with 2 snakes, and a weekend of peaceful bliss blanketed between two parks.
Posted by Bill Howard at 2:39 PM